GREATER Manchester Combined Authority held a launch event in Manchester on March 16 for its HS2 and Northern Powerhouse Rail (NPR) growth strategy, which sets forth the region's ambitions for high-speed rail and details how these two major rail projects can stimulate growth and opportunity both in Greater Manchester and across the north of England. 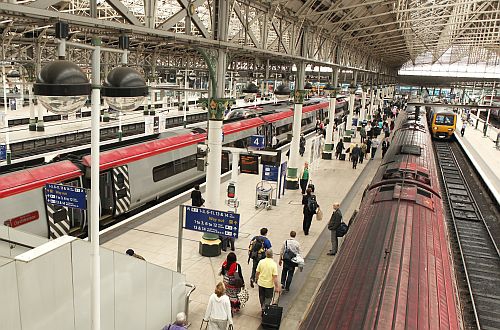 Manchester Piccadilly could be an integrated hub when HS2 opens in 2033.

The strategy, "The stops are just the start" focuses on four areas designed to support economic growth and the potential of both HS2 and NPR.

HS2, Britain's new 338km high-speed link between London, Birmingham, Manchester and Leeds, is set to reach Greater Manchester by 2033. NPR proposes improving east-west connectivity between the north's major cities, offering a journey time of 30 minutes from Manchester to Liverpool, Leeds and Sheffield. The business case for the estimated £13bn project is set to be released by the end of the year.

Speaking following the launch, Manchester mayor, Mr Andy Burnham, told IRJ that the strategy represents a unified vision from the region's political and business communities, and is intended to maximise the opportunities on offer, which is contrary to the government's current view for the project, which he describes as a second best option.

"It is a fact that we are the only part of the country that is having to contribute to a HS2 station, and it is also a fact that the preferred option for Piccadilly is a second best option," Burnham says. "I look further down the line at Birmingham and London and I see no expense being spared. So, it is a bit of a ball back in the government's court. If you are going to give us this Northern Powerhouse which you promised us, you are going to have to accept what we are saying and work with us."

In particular, the strategy emphasises maximising the opportunity to transform Manchester Piccadilly, the future terminus of HS2, into an integrated transport hub which links international, national, regional and local services. Current plans for HS2 propose an extension of the existing station concourse, which would add five extra HS2 platforms. The line would run in a 12.1km twin-bore tunnel from Rostherne to Ardwick, which would be Britain's largest rail tunnel.

However, the study favours a tunnelled high-speed rail station and stresses the importance to "build it once and build it right." It hopes the project can spur a significant regeneration of the area around the station, creating 40,000 new and sustainable jobs,13,000 new homes, and nearly a million square metres of commercial developments.

The strategy calls for a similar approach to Manchester Airport, another stop on the HS2 alignment. The strategy says HS2 presents the opportunity to create a brand new station at the airport as well as new homes, offices, and hotels. The site could create up to 20,000 new jobs in the next 10 years.

"The vision we are putting forward today is pretty compelling," Burnham says. "It's a vision about maximising connectivity and opportunity, the challenge comes to the government: are you going to go for a sub optimal option, or are you going to do the thing that will rebalance this part of the country?"

"So far with HS2 we have failed to explain clearly to the public what this can mean in terms of rail connectivity and also economic prosperity. This document begins to fill in those gaps, and I think begins to explain to the public why so many people are committed to HS2."

A report on Manchester Metrolink and future rail connectivity in the city will appear in the April edition of IRJ.