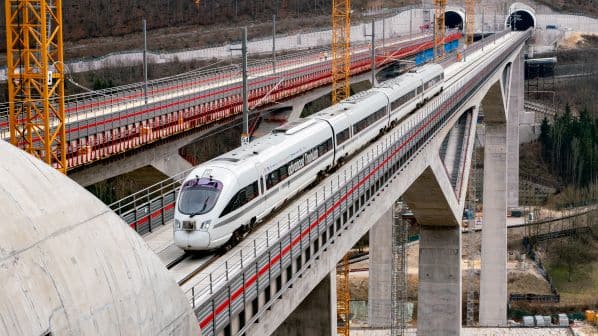 The advanced TrainLab on the Filstal Bridge during a test drive on the new Wendlingen-Ulm line.
Photo Credit: DB/Jannik Walter

THE new German Rail (DB) timetable coming into effect on December 11 will see the journey time between Stuttgart and Munich reduced by 15 minutes with the opening of the new high-speed line between Wendlingen and Ulm. Testing on the 59.6km, €4.16bn line began in February.

The number of daily services between Stuttgart and Munich will increase to 90, with the existing Dortmund/Düsseldorf - Stuttgart ICE service running via Cologne and Mannheim to Ulm, Augsburg and Munich. Together with existing direct services via Nuremberg or Stuttgart, passengers will be able to travel twice an hour between Cologne and Munich without having to change trains.

DB is increasing the number of seats on ICE services to Frankfurt Airport by 60%, with the Basle - Cologne - Dortmund service extended to Hamburg, providing passengers from Münster, Osnabrück and Bremen with more frequent direct connections to Germany’s largest airport. There are also faster and more frequent direct services to Frankfurt Airport from Munich and Augsburg.

DB’s new ICE 3neo high-speed train will enter daily service between Dortmund, Cologne and Frankfurt for the first time under the new timetable. During 2023 DB will put into service a total of 37 new ICE trains, including XXL ICE 4 trains with 13 cars and 918 seats that will be deployed on the busiest routes.

Improvements to conventional services include a new overnight IC service from Zurich to Berlin and Prague via Erfurt, Halle and Leipzig. The Zurich - Hamburg overnight service will be rerouted to serve Heidelberg, Darmstadt and Hanau, while the service from Munich to Venice, Rijeka, Zagreb, Vienna and Budapest will start in Stuttgart and serve Göppingen, Ulm and Augsburg.

“With the new timetable, we are taking the next step on the way to the Deutschlandtakt and are clearly setting the course for further growth,” says DB head of long-distance passenger transport, Dr Michael Peterson. “Our passengers will benefit directly from the investments in infrastructure and new vehicles. In 2023, for example, our train fleet will grow by three new ICE trains every month. That is a record.”