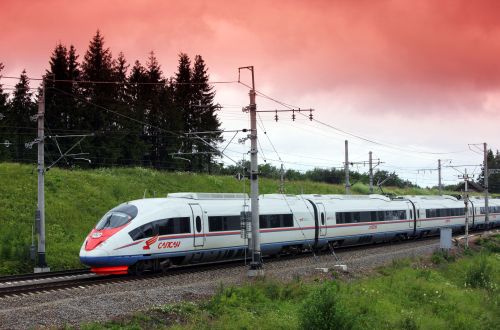 The work encompasses preparing sites for the start of construction on the 172km stretch between Zheleznodorozhnaya in the Moscow suburbs and Vladimir, which includes three intermediate stations at Noginsk, Orekhovo-Zuevo, and Petushki.

The site has been engineered to take into account both the construction of the new railway and sections of the new M-7 Volga highway, bypassing the cities of Balashikha and Noginsk. Russian Railways (RZD) says combining the two projects will optimise costs and minimise environmental impact.

Design work has been conducted by a Russian-Chinese consortium comprising Mosgiprotrans, Nizhegorodmetroproekt, and China Railway Eryuan Engineering, which were commissioned by High Speed Railways, a subsidiary of RZD. Two main routes with a cumulative length of 384km have been designed between Moscow and Vladimir, of which 100km will utilise ballasted track and 284km slab track.

The line will be designed for a maximum speed of 400km/h and requires the construction of 151 structures, including 26 large and medium bridges, 10 elevated roads and eight overpasses. It will also utilise advanced communications and signalling systems as well as GSM-R/DMR telecommunications, thermal imaging and surveillance cameras.

Once in service, the line is expected to offer an estimated journey time of 56 minutes between Moscow and Vladimir, and an average of 20 million people are expected to use the service annually by 2035, with 50 pairs of trains operating on the line every day.

The complete 762km Moscow - Kazan high-speed line will offer a maximum operation speed of 360km/h, with a journey time of 3h 30min compared with 14 hours at present.