A 220km high-speed line linking Thailand’s three main airports has been delayed as funding for the project has not been approved. 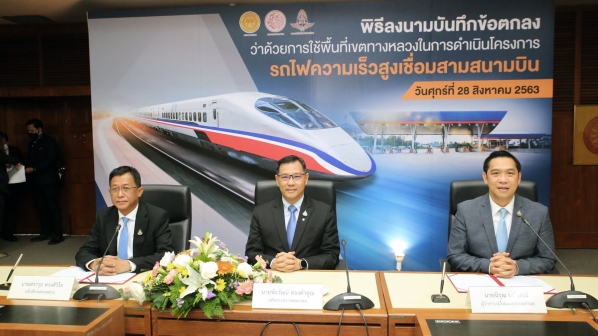 The announcement came as minister of transport, Mr Chaiwat Thongkamkoon, presided over the signing of a memorandum of understanding (MoU) between the Department of Highways and State Railway of Thailand (SRT) allowing the project linking Suvarnabhumi, Don Mueang and U-Tapao airports to use areas adjacent to the country’s highways.

“The budget to demolish infrastructure to make way for the new high-speed system has not been approved,” says SRT governor, Mr Nirut Maneephan.

SRT and a consortium led by the Charoen Pokphand Group signed a Baht 224.5bn ($US 7.17bn) public-private partnership (PPP) deal to build the line in October 2019.

The project is designed to develop Thailand’s tourism and business sectors, and will run from Don Mueang Airport to the north of Bangkok, via Bang Sue and Makkasan in central Bangkok to Bangkok Suvarnabhumi Airport. It will then continue along SRT’s East line via the Bang Pakong River, Chachoengsao, Chonburi and Pattaya to U-Tapao Rayong Pattaya International Airport in the south. The line will have a maximum speed of 250km/h.

The project is the first under a programme to construct a high-speed network across Thailand.

In July, SRT launched a feasibility study for the 190km Baht 101.7bn Rayong - Chanthaburi - Trat eastern Phase II section of its high-speed rail project. This was followed last month by the unveiling of a Baht 31.9bn project to develop Ayutthaya, a Unesco World Heritage site north of Bangkok, as a national high-speed rail hub, to be funded through a PPP.

For detailed data about high-speed projects in Asia, subscribe to IRJ Pro.