THE prime minister of Italy Mr Paulo Gentiloni travelled to Campania on a Trenitalia Frecciarossa 1000 high-speed train on June 6 to inaugurate the first phase of Naples Afragola station. 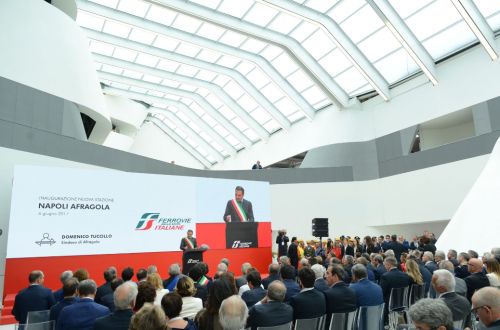 Located 3km north of Naples on the high-speed line to Rome, Afragola will be served by 18 services per day in each direction on the Turin - Salerno and Venice - Reggio Calabria routes from the start of commercial operations on June 11. The journey time from Afragola to Rome Termini will be 55 minutes.

Construction of the station has taken far longer than originally anticipated. Work ceased during the economic downturn but in February 2015 Italferr awarded Astaldi a €61m engineering procurement and construction contract to complete the station, which was designed by architect Mrs Zaha Hadid.
The main structure of the station is 400m long and straddles the platforms with four levels covering an area of 30,000m2.

When the second phase of the project is completed in 2022, Afragola will become an interchange for the Circumvesuviana Railway, regional services to Caserta, Benevento and Naples North, and the new Naples - Bari high-speed line.