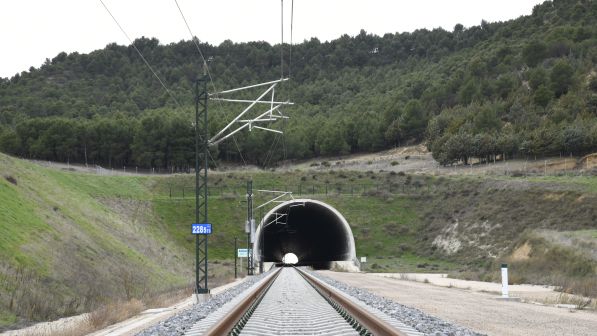 SPANISH infrastructure manage Adif AV brought into service the 86.5km high-speed line between Venta de Baños and Burgos on July 21, built at a cost of €759m to shorten journey times between Madrid and northern Spain.

The new line is single track, designed for a maximum speed of 350km/h, and is equipped with ERTMS Level 2 signalling.

The route between Venta de Baños and Burgos has 12 viaducts with a total length of 4.6km, and two tunnels with a combined length of 1.3km.

At Venta de Baños, there is a junction with the high-speed line to Palencia and León, enabling through services to operate between León and Burgos.

A gauge-changing installation has been installed at the new Burgos Rosa Manzano station, where trains from Madrid will change from standard to broad gauge to continue their journeys to destinations including Bilbao and San Sebastián.

National operator Renfe has deployed series 112 high-speed trains on the route, reducing the journey time from Madrid to Burgos by 45 minutes to 1h 30min with one intermediate stop at Valladolid.

The journey time from Madrid to Bilbao has been cut from 5h 06min to 4h 28min, while San Sebastián is now reached in 4h 48min from Madrid rather than 5h 23min.

With work underway on other projects costing a total of €11.7bn, Adif AV says that the Spanish high-speed network will reach 4000km this year, reinforcing its status as the largest in Europe.

It also says that the Spanish high-speed network now has largest proportion of routes equipped with ERTMS, now totalling 2700km.