CALIFORNIA High Speed Rail Authority (CHSRA) has released its staff recommendations for the State’s preferred alternatives for two sections of the high-speed line in Northern California. 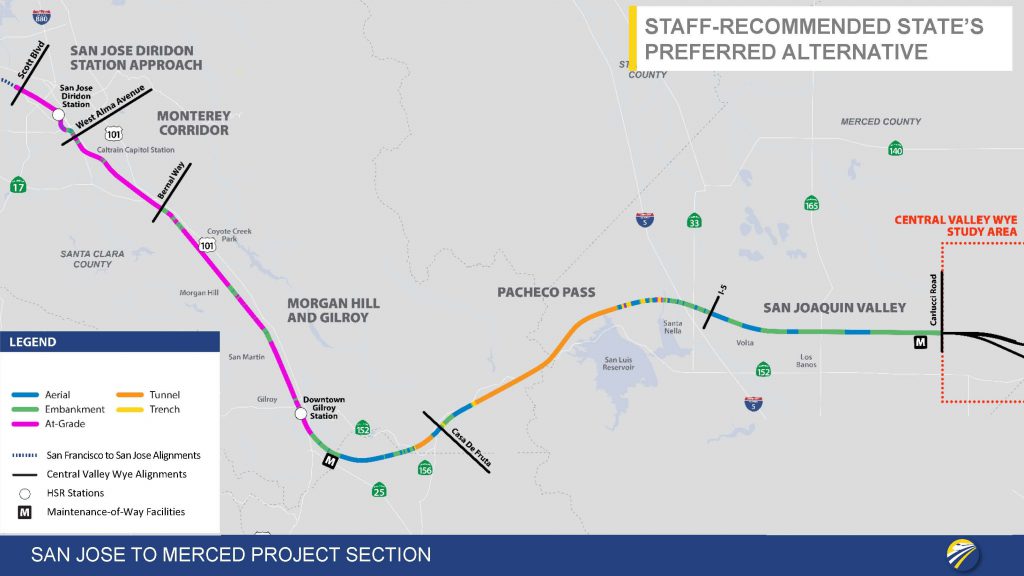 On the San Jose - Merced project section, CHSRA has recommended Alternative 4 as the State’s preferred alternative. Between San Jose and Gilroy, Alternatives 1, 2, and 3 are dedicated high-speed rail corridors while Alternative 4 is a blended system largely within the Caltrain and Union Pacific Railroad corridors.

Alternative 4 is distinguished from the other three alternatives by a blended, at-grade alignment that would operate on two electrified passenger tracks with one conventional freight track. This would predominantly utilise existing Caltrain and Union Pacific Railroad rights-of-way with a maximum speed of 177km/h.

The line would then continue to a dedicated high-speed rail alignment through the Pacheco Pass.

For the San Francisco - San Jose project section, CHSRA has recommended Alternative A as the State’s preferred alternative. This option includes a light maintenance facility on the east side of the line at Brisbane in San Mateo County and does not include additional passing tracks in the middle of the corridor.

With this alternative, high-speed rail stations would be located at the existing 4th/King Street and Millbrae Stations. The existing 4th/King Street Station would serve as the interim terminal station for the project section until the downtown extension provides HSR access to the Salesforce Transit Center. The East Brisbane LMF under Alternative A would be built on approximately 40 hectares of predominantly vacant land east of the Caltrain corridor. CHSRA says it has also worked closely with Caltrain to develop a reasonable range of service plans for blended high-speed rail and Caltrain service without the need for the passing tracks in Alternative B.

“The identification of the preferred alternatives is an important step in defining the programme and advancing the implementation of the authority’s Silicon Valley to Central Valley Line that will ultimately bring high-speed rail to Northern California,” says Northern California regional director, Mr Boris Lipkin. “In recommending preferred alternatives, we aim to find the right balance between system performance characteristics, environmental factors, and community factors.”

Following the announcement on July 2, CHSRA launched a public consultation programme which will run throughout the summer. In September, staff will present their recommendations along with the feedback received during the consultation and will seek direction from the board of directors for which alternatives to identify as the State’s preferred routes.

The sections are the final preferred alternatives to be identified for the Phase 1 system between San Francisco and Los Angeles.

The project is yet to receive funding, and was not funded under the state’s existing high-speed programme which was scaled back by the governor, Mr Gavin Newsom, in February.