IRJ at Middle East Rail, Dubai: MOROCCAN National Railways (ONCF) says it is on course to open Africa’s first high-speed line in the third quarter of this year. 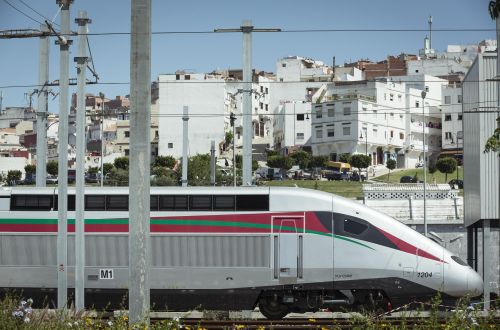 Speaking at the Middle East Rail conference and exhibition in Dubai on March 12, ONCF managing director for high-speed train maintenance Mr Luciano Borges said work on the 183km Tangiers – Kenitra high-speed line is now 99%-complete and good progress is being made on the delivery of rolling stock (97% complete) infrastructure works (95% complete) and operational preparation (78% complete).

Tracklaying was completed in October and the final section of catenary was installed in November. The 25kV 50Hz ac electrification system was energised at the beginning of January and the Integrated Command Centre was commissioned in February. Stations will be completed by June, when the new line is due to be handed over to ONCF by the contractors for the start of trial running.

ONCF has established an Operational Ability Taskforce to ensure the company is ready to begin operating commercial services by the third quarter. Led by senior management, the taskforce includes staff from all departments of the company and used a risk mapping methodology to identify more than 150 actions, which are split across nine topics.

ONCF has hired 479 new staff as part of the project and more than 10,000 hours of training will be carried out before the start of revenue service.

A fleet of 12 Alstom Euroduplex trains will operate at up to 320km/h on the new line, reducing the Tangiers – Kenitra journey time from 3h 15min to 50 minutes and Tangiers – Casablanca from 4h 45min to 2h 10min.

A brand name for the high-speed service will be unveiled when the line opens.

Morocco is planning to build 1500km of high-speed lines as part of its Rail 2040 master plan, which aims to achieve journey times of less than two hours between the country’s key cities. Borges told IRJ that preliminary studies have been completed for the alignment and tunnels for the Marrakech – Agadir high-speed line, while detailed studies for the extension of the Tangiers – Kenitra high-speed line to Casablanca have also concluded.