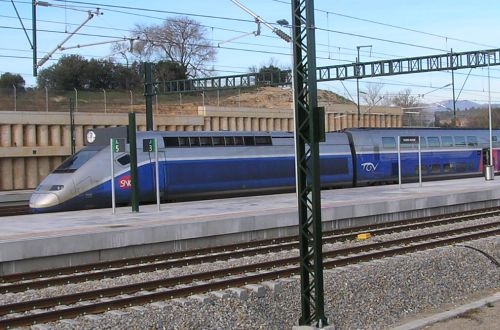 At present SNCF offers a twice-daily TGV Dasye service from Paris to Figueres, while Renfe serves its side of the border with two Madrid - Barcelona - Figueres AVE trains which are timed to connect with the TGV service. This scheme will be replaced in April by extending SNCF's services to Barcelona, with service set to offer a Paris - Barcelona journey time of 6h 20min. A third TGV will run at weekends.

The extended TGV services will use the new Barcelona - French border high-speed line which was inaugurated in January, and will stop at the new stations at Figueres and Gerona, while also serving Perpignan, Narbonne, Montpellier, Nimes and Valence in France. Some seats on the Spanish section will be reserved for Renfe's Avant regional high-speed brand to make domestic high-speed travel for Spanish commuters more affordable.

A new route will be established next month between Barcelona and Toulouse using at least four Renfe AVE 100 high-speed trains. The sets have been modified and were recently tested on the French network.

SNCF and Renfe are also set to announce the launch of several other new services between Barcelona and destinations in southern France in the next few months.