MORE than 500 passengers were evacuated from a German Rail ICE on the Cologne - Frankfurt high-speed line on October 12 after a severe fire broke out onboard. 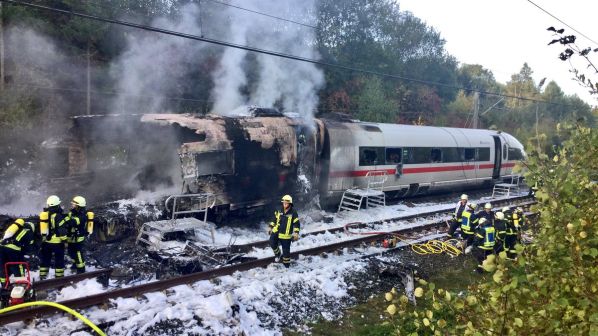 The class 403 ICE 3 set, which was forming train ICE 511 (05.55 Cologne - Munich) was mid-way between Cologne and Frankfurt when the incident occurred.

The fire was detected at around 06.30 CET by a passenger who used the emergency handle to alert the driver and stop the train.

The fire started in a trailer vehicle, which was reportedly not in passenger use due to unspecified technical problems. However, passengers were travelling in both adjacent vehicles.

The train was brought to a stand in open countryside adjacent to the parallel A3 highway near the village of Dierdorf north of Montabaur. All 510 passengers and crew were evacuated, with three passengers reportedly sustaining minor injuries. 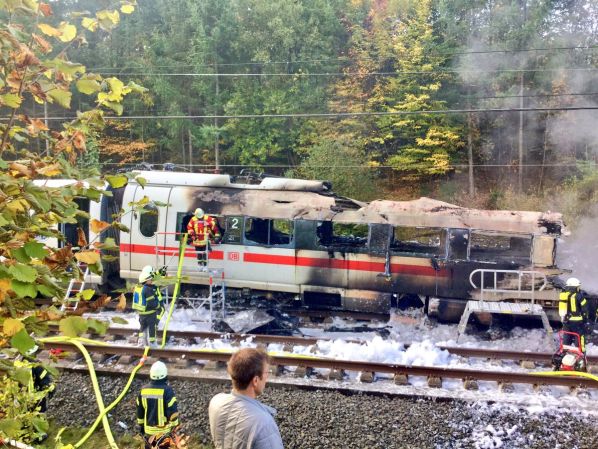 Evacuated passengers were transferred by bus to Montabaur where a replacement train was provided.

DB says the high-speed line will remain closed until Sunday evening to enable analysis and recovery of the damaged train as well as infrastructure repairs. In the meantime, trains are being diverted via the Rhine Valley route through Koblenz and Mainz, adding up to 80 minutes to journey times.

Evacuation of the train was completed quickly as all ICE 3 trains using the Rhine-Main high-speed line are equipped with retractable steps due to the large number of tunnels on the line. Safety regulations requiring ease of evacuation in tunnels were introduced before the line opened in 2002.