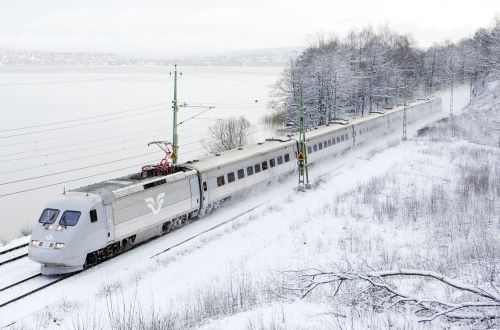 However, it remains unclear when the key central section, from Linkoping via Jönköping to Borås, of the 320km/h route will be approved by the government. Mrs Katarina Norén, Trafikverket's purchasing director, told IRJ that this phase of the project is currently "resting" after no money was allocated towards it in Sweden's 2014-2025 Transport Plan announced last year. She said that despite the plan allocating 20% more to rail investment overall than its predecessor, a greater emphasis on infrastructure maintenance means there is simply not enough money to fund every proposed project.

However, Norén does not feel that this would hinder completion of the high-speed scheme in the long-term. She says the benefit to Swedish society of offering a 2h 30min journey time between its two largest cities, which will take planes out of the sky and cars off the road, has universal public and political support, which is also likely to lead to the development of the Jönköping - Malmö high-speed project as well.

"There appears to be a consensus now in Sweden that investment in rail is a good thing," Norén says. "It used to be that the left tended to back rail and the right road, but now both parties are behind these projects, which means even if there is a change of government they are not going to take money away from it."

The Stockholm - Linköping project involves building 154km of new railway infrastructure from Järna southwest of Stockholm to Linköping at a cost of SKr 35bn ($US 5.5bn), with funding set to come partly from the European Union under the Trans-European Networks (Ten-T) programme. The line will be double-track, and will include 20km of tunnels and 155 bridges totalling 10km. The line will also improve access to Stockholm Skavsta, Sweden's third largest airport.

Trafikverket's project manager for the Stockholm – Linköping scheme, Mr Ali Sadeghi, says that dependent on government approval of plans for the project, which is expected next spring, Trafikverket will award a SKr 1.1bn plan-design contract in 2014. Upon completion of this, he says the intention is for construction to commence in 2017 and be ramped up gradually to completion in 2028.

Planning is also underway on the 60km Gothenburg - Borås section of the project, which is estimated to cost SKr 15bn and will include a link to Gothenburg Landvetter Airport. A tender is set to be announced in the first half of 2014 for the project with construction expected to start in 2020.

The new double-track line will enable freight traffic to have dedicated space on existing infrastructure, a move which Norén says has the universal backing of Sweden's railfreight sector and will help to reduce maintenance costs.

The current status of the high-speed scheme and other railway infrastructure projects approved in the transport plan were presented to prospective suppliers and project partners during the Nordic Rail event. Short one-to-one 20 minute meetings were subsequently held with project manager's from each of the projects where discussions could take place about what specific suppliers can bring. The projects approved in the transport plan are:

• the West Line track-doubling project which is estimated to cost SKr 2.9bn at 2009 prices

• improvements to the Gothenburg Port Line which will increase capacity at Sweden's largest port, and

• the 8km Flackarp - Akarp four-track project, which will increase capacity on the Malmö - Lund mainline and is estimated to cost SKr 3.8bn.

Norén says the aim of such an event is to boost prospective interest in Trafikverket's activities and increase the number of bidders for potential contracts. On average Trafikverket receives two to three bids, but it hopes that by increasing the amount of interest and ultimately competition, it will be able to drive costs down.

"If we can increase this to three to five, that would make a huge difference," she says.