The line would form part of the Southeast High-Speed Rail corridor although is not currently funded. 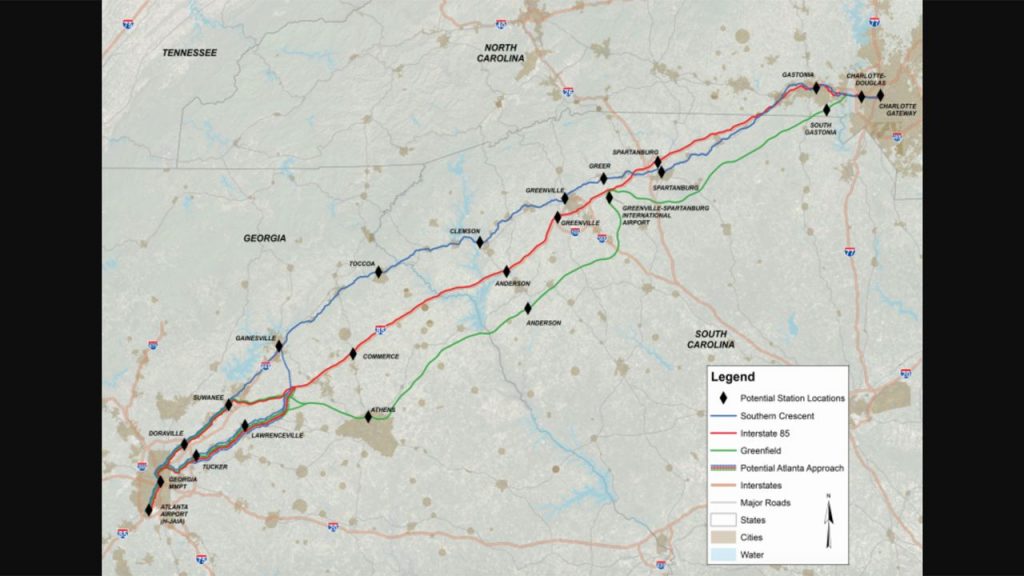 The southern route, shown in green, has been selected as the preferred route.

A preferred route has been released for the proposed 273km high-speed passenger line linking Charlotte, North Carolina, and Atlanta, Georgia, in the United States.

Georgia DOT and FRA worked with North Carolina and South Carolina stakeholders throughout the process. FRA identified the greenfield corridor as the preferred alternative based on analysis presented in the Tier 1 Draft EIS, and input received from the public, stakeholders and agencies during public meetings and the comment period.

The corridor connects Charlotte Gateway Station and the Hartsfield-Jackson Atlanta International Airport. Two stations in South Carolina, three in North Carolina, and five in Georgia could be included. The route “generally follows a new dedicated alignment between the Charlotte Douglas International Airport and northeast Atlanta,” according to FRA, which noted that the service could use diesel (for speeds of up to 200km/h) or electric (up to 350km/h). “A future Tier II study will define the specific alignment for the Greenfield Corridor alternative, including the final approaches into Atlanta and Charlotte,” FRA says.

The Atlanta - Charlotte line is an “integral extension of the Southeast High-Speed Rail (SEHSR) corridor, as designated by the US Department of Transportation (USDOT),” FRA says. “The SEHSR corridor will ultimately provide important connectivity between Atlanta and Washington, DC, and on to the Northeast Corridor to Boston, Massachusetts.”

Funding to build the Charlotte - Atlanta section of the SEHSR has not yet been fully identified, according to FRA.

For detailed data on high-speed rail projects in North America and around the world, subscribe to IRJ Pro.