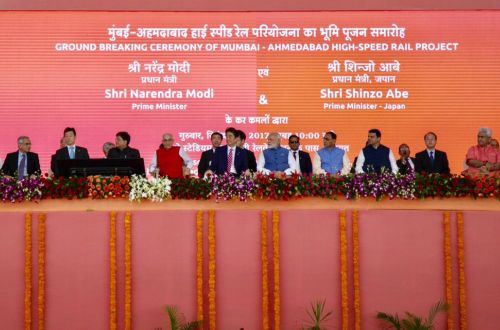 The line will reduce the journey time between the two cities from around seven hours to 2h 7min for the fastest services, which will make four stops, with trains running at speeds of up to 320km/h. Rolling stock will be manufactured by the Kawasaki Heavy Industries and India’s state-owned Bharat Heavy Electricals Limited (BHEL).

The line will be elevated for 92% of its length, with 460.3km of viaducts and 12.9km of embankments and cuttings. The project includes the construction of India’s longest tunnel, which will be 21km long, as well as a 7km undersea tunnel at Thane Creek. The line will serve 12 stations including Bandra Kurla, Thane, Virar, Boisar, Vapl, Billmora, Surat, Bharuch, Vadodara, Anand, Ahmedabad, and Sabarmati.

Japan International Cooperation Agency (Jica) is financing 81% of the Rs 1.1 trillion ($US 18.9bn) project through a soft loan with a repayment term of 50 years and a moratorium for the first 15 years. The loan, which has an annual interest rate of 0.1%, is being provided under the Overseas Development Assistance programme.

The project is due to be completed in 2023, although Modi wants the opening of the line to be brought forward to coincide with the 75th anniversary of India’s independence on August 15 2022. “We expect that Japanese and Indian rail engineers will be able to complete the project a year in advance of the targeted date,” Modi says.

Through a video conference, the two leaders also launched the start of civil works on a High Speed Rail Technology Training Centre at Vadodara in the state of Gujarat.
Three hundred rail engineers will initially be trained in Japan and they will later support the training of 4000 people in India. “These officials will go on to become the backbone of India’s future high speed railway plans,” says Mr Achal Khare, chairman of the National High Speed Rail Corporation (NHSRC).

More than 100 Japanese railway engineers have already arrived in India to provide initial training and Abe says and the Japanese engagement in India’s high speed plans marks the start of a “special strategic and global partnership” between the two nations. Referring to Modi’s pet “Make in India” slogan, he said that - with the help of Japanese technology - it will be possible for India to emerge as the “world’s factory.”