Proposed line could connect HS1 and HS2 with London airports

LONDON-based consultancy Expedition Engineering has released its designs for a €10bn, 140km high-speed line which would connect London’s Heathrow and Gatwick airports with the current HS1 line and the future HS2 line, bypassing London. 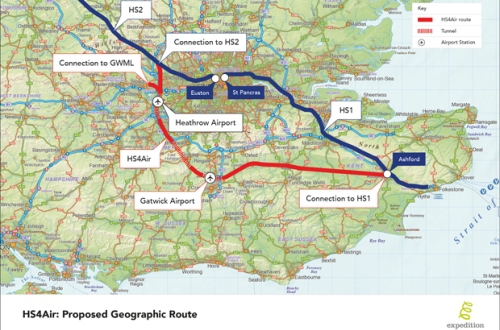 The route of the proposed HS4Air line.

Expedition says the “HS4Air” proposal has been conceived to complement and enhance the benefits of other transport infrastructure projects currently being planned in southeast England to increase rail and aviation capacity.

The proposal was put forward earlier this year in response to the Department for Transport’s (DfT) call in March for ideas for market-led proposals to enhance the railway, which would need to be financially viable without government support.

Expedition director Mr Alistair Lenczner told IRJ he is confident there is the enough interest from large investors such as sovereign wealth funds to make it possible without government funding, and he is currently working with stakeholders who would benefit from the project to build support for the idea.

The line would connect HS1 at Ashford to HS2 northwest of London via Gatwick and Heathrow airports with a spur connection to the Great Western Main Line. Approximately 40% of the route would use the current line between Tonbridge and Ashford. Around 20% of the line would run in three new tunnels to avoid impacting the environmentally-sensitive Surrey Hills Area of Outstanding Natural Beauty, and to pass under built-up areas around Heathrow and Gatwick.

Lenczner says based on a speed of around 320km/h, HS4Air could reduce journey times:

The DfT says it will provide a response to the proposals in the autumn.