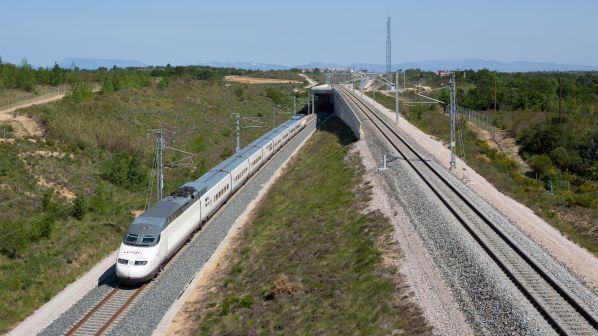 Renfe has had trouble entering the French market in the past.
Photo Credit: David Gubler

SPANISH national operator Renfe has told IRJ that it wants to operate high-speed trains between Paris and London using the Channel Tunnel and High Speed 1.

A Renfe spokesperson said there are paths available on the high-speed route for extra trains to operate. Pre-pandemic figures showed that the Paris - London market had 9 million passenger annually, with 7 million travelling by Eurostar. “This high-speed corridor was growing until Covid-19, a trend that is expected to recover next year,” the spokesperson told IRJ. “According to the demand analyses carried out, it would be viable and profitable for Renfe to compete with Eurostar.”

The operator plans to use its own trains, for which the first step would be the certification of the trains. The business plan foresees the use of a minimum of seven sets, and the spokesperson says Renfe estimates securing a return on investment from the new service in the fourth year of operation. No details were revealed as to which trains would be used.

Renfe also confirmed it plans to approach British infrastructure manager HS1 Ltd and Channel Tunnel manager Getlink for approval to run trains, rather than via French authorities after it suffered problems gaining approval to operate on the Paris - Lyon - Marseille corridor. “Both are well positioned in France and very interested in the development of the project,” the spokesperson says.

Renfe also plans to extend the cross-channel service to other French and international destinations, although these are not identified. Prior to the pandemic, Eurostar was planning to introduce London - Bordeaux services.

The Renfe 2019-23 strategic plan reveals the operator’s plans to operate internationally in markets including Italy and France, as well as the United States and Latin America. The operator recently completed the acquisition of a 50% stake in Leo Express, expanding its presence to the Czech Republic, Germany, Poland and Slovakia. It is also acting as the early operator for the Texas Central high-speed project in the United States.

IRJ did not receive a response from Getlink ahead of publication.