RFI fined for discrimination in planning for 360km/h operation

THE Italian Transport Authority (ART), headed by Mr Andrea Camanzi, issued infrastructure manager Italian Railway Network (RFI) with a €620,000 fine on August 2 for discriminatory behaviour in the sanctioning of operation at speeds exceeding 300km/h on the country’s high-speed network. 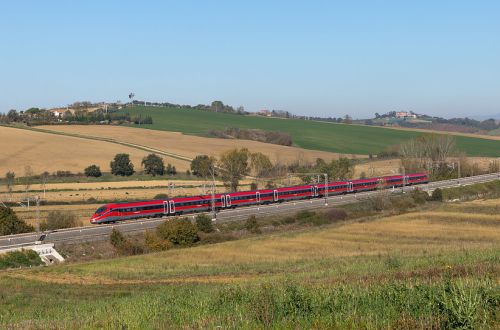 RFI is charged with the unequal, discriminatory and opaque treatment after allowing Trenitalia to run trains at a commercial speed of 360km/h without fulfilling its mandatory obligation to inform all other operators of the planned speed increase, which was ultimately abandoned.

The 24-page resolution gathers the whole chronology of correspondence between the main actors in the case, including RFI, Trenitalia, the National Agency for Railway Safety (ANSF), the Ministry of Transport and Infrastructure, and open-access high-speed operator NTV-Italo.

An initial resolution on the case was issued against RFI in October 2017 on the basis of two previous resolutions in related cases and a claim brought by NTV-Italo.

ART found there was a failure by RFI to communicate the conclusions of a 2012 meeting of a work group on increasing speeds on high-speed lines to more than 300km/h, which was attended by representatives of the infrastructure manager and ANSF. During this meeting both organisations, together with several others, evaluated two applications made by Bombardier Transportation Italy on behalf of Trenitalia seeking authorisation for the commercial operation of ETR 1000 trains at 360km/h on the high-speed network.

The working group was later expanded to include Bombardier and Italcertifer, a subsidiary of Italian State Railways (FS) which was appointed as an independent safety assessor.

At this point, the Ministry of Infrastructure and Transport requested a technical evaluation from RFI, which said in July 2012 that only small upgrades were needed to accommodate 360km/h running, but full-scale testing would be needed to evaluate operation at speeds exceeding 300km/h.

RFI did not possess suitable rolling stock for such tests, but Trentialia required type approval of the ETR 1000 for 360km/h operation, and these trains could therefore be tested at up to 400km/h.

In December 2014, Italo-NTV wrote to RFI requesting information on what upgrades were envisaged to enable higher-speed operation.

Italo-NTV claimed that it lacked clear information on RFI’s plans, and complained that its AGV high-speed trains were limited to the same speeds as Trenitalia’s older ETR 500 and ETR 600 trains despite their higher performance.

The open-access operator says it had proposed “several times” to establish a technical working group to look into the viability of operating at speeds of more than 300km/h on the Milan - Rome - Naples corridor, but the suggestion “never found acceptance.” This, Italo-NTV argues, “constitutes proof of unequal treatment among train operators, for the exclusive benefit of the incumbent.”

Furthermore, NTV-Italo claims the cost of certifying the AGV fleet for 360km/h operation would exceed €70m, whereas this could be done as part of the type approval for the Trenitalia ETR 1000s.

The ART ruled that RFI had infringed the provisions of Legislative Decree No. 112 (July 2015), which transposes the recast of the European Commission’s First Railway Package (Directive 2012/34/EU) into Italian law.