RUSSIAN Railways (RZD) says it is pressing ahead with the development of a concept for a high-speed freight train with the aim of capturing a slice of the market for high-value goods between China and Europe from air cargo operators. 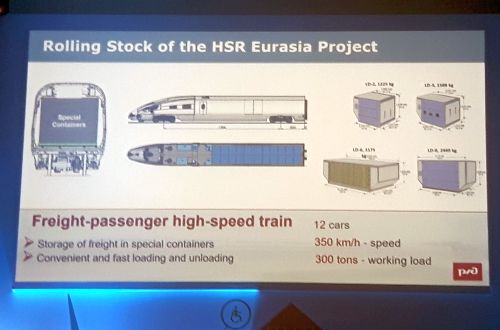 RZD first vice-president Mr Alexander Misharin told delegates at SNCF’s 3rd Forum on Sustainable Mobility in Paris on October 17 that increasing trade volume of goods with high-added value and the surge in e-commerce between Asia and Europe could help to provide a basis for freight operations on the 762km Moscow - Kazan high-speed line and longer-term extensions towards China and Europe.

“Forecasts show this could be an extremely efficient way to move high-value freight,” Misharin says. “At the moment a third of high-end goods travelling between China and Europe goes by air. We could achieve a 2-3 day transit time across Russia with high-speed rail, which would be competitive.”

RZD has been working with CRRC and Siemens-Sinara joint venture Ural Locomotives to develop the concept. The 12-car trains would carry both passengers and freight, using specially-designed containers to accommodate a 300-tonne working load.

Misharin confirmed major construction will begin on the Moscow - Kazan high-speed line next year. The line will have a design speed of 400km/h and a commercial speed of 350km/h.