SIEMENS has revealed details of a concept for its next-generation high-speed train, the Velaro Novo, which it will present at the InnoTrans exhibition in Berlin in September. 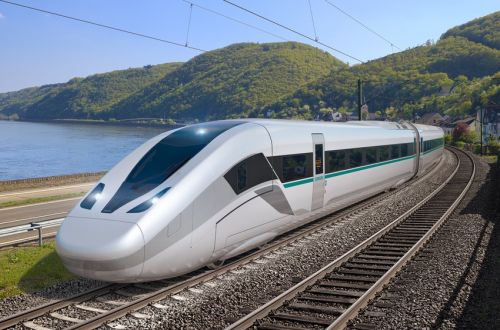 Siemens says the new design will offer a 30% reduction in energy consumption at 300km/h, compared with previous Velaro models, based on a simulation of operations on the Cologne - Frankfurt high-speed line.

The train draws on experience gained from three generations of Velaros, starting with the Velaro E delivered to Spanish national operator Renfe in 2005. Since then more than 1000 Velaro sets have covered more than 2 billion-km in service, adding 1 million-km to this total every day.

“What we are presenting today is the result of five years of development: a platform offering uniquely optimised energy consumption and maintenance costs, as well as maximum flexibility and reliability,” says Siemens Mobility CEO, Mrs Sabrina Soussan.

Velaro Novo is based on the proven distributed traction architecture adopted for the German Rail (DB) ICE 3, and can be supplied as a single or dual-voltage (15/25kV ac train) with a scalable traction system for maximum speeds ranging from 250 to 360km/h. Power outputs range from 4.7MW to 8MW for a 202m-long seven-car train.

The train will be around 15% lighter than the current Velaro, reducing the weight of a seven-car train by more than 70 tonnes. This has been achieved through the use of inside-frame bogies, silicon carbide auxiliary converters, and the use of friction-stir welding for bodyshell fabrication.

At 28.75m, the Velaro Novo vehicle is around 3m longer than its predecessors but the bodyshell is 62mm narrower to meet structural gauging requirements. Nonetheless, Siemens has optimised the interior design to achieve an aisle width of 535mm, 11mm wider than the previous generation.
Siemens has devised an “empty tube” concept for the interior, increasing available space by 10% by eliminating technical equipment that aversely influences interior flexibility and standardising mountings for interior fittings. Electrical cabinets have been moved to the outer walls and ceiling of the vehicle, providing a more spacious saloon interior.

A test car, dubbed SeeItNovo, began running on the German main line network in April and is being operated by DB Systemtechnik. The test car is currently operating in the ICE S test train and recently reached 331km/h. Testing of the SeeItNovo vehicle will continue until the end of next year and Siemens says the first complete train will be ready for delivery in early 2023.

Technology for the new train is being tested on the SeeItNovo test vehicle.