MALAYSIAN prime minister Mr Najib Razak and his Singaporean counterpart Mr Lee Hsien Loong witnessed the signing of a bilateral agreement at the Malayisan prime minister’s retreat in Putrajaya on December 13, which commits the two countries to complete the Kuala Lumpur - Singapore high-speed line within a decade. 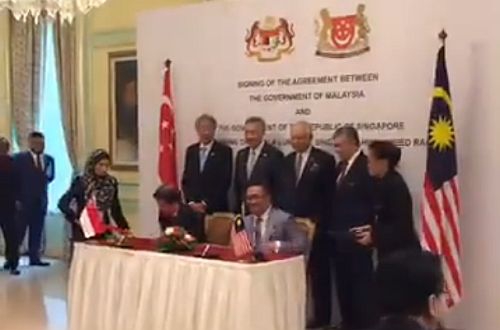 The legally-binding agreement, which was signed by Singapore’s minister for infrastructure and transport Mr Khaw Boon Wan and Malaysian minister in the prime minister’s Department Mr Abdul Rahman Dahlan, builds on the Memorandum of Understanding signed in July, which sets out the timeline and implementation structure for the project.

The two countries will design, build, finance and maintain infrastructure and operate the stations within their respective territories, through the Malaysia High Speed Rail Authority (MyHSR) and the Land Transport Authority (LTA) in Singapore.

A privately-financed assets company will design, build, finance and maintain rolling stock and infrastructure assets including track, electrification, signalling and telecommunications. A joint tender for this contract will be issued in 2017.

Malaysia will launch a separate procurement for a domestic operator (OpCo Domestic) to run services within Malaysia. OpCo International will have scheduling and operational priority over services operated by OpCo Domestic.

Tendering to appoint a joint development partner (JDP) has already begun and this contract will be awarded early next year. The JDP will be responsible for developing technical and safety standards and as well as providing project management support, technical advice and guidance through the procurement process.

The line will link the two countries via a new bridge over the Straits of Johor, which will be constructed to the west of the Second Link bridge between Gelang Patah in Malaysia and Tuas in Singapore.