MALAYSIAN prime minister Mr Najib Razak and his Singaporean counterpart Mr Lee Hsien Loong witnessed the signing of a Memorandum of Understanding in Putrajaya, Malaysia, on July 19 setting out a timeline and implementation structure for the Kuala Lumpur - Singapore high-speed line. 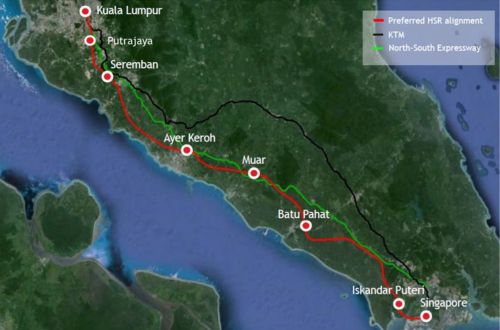 The two governments will jointly take responsibility for developing, building, and maintain infrastructure within their own countries. Malaysia High-Speed Rail Corporation (MyHSR) will be therefore be responsible for the 335km Malaysian section, while LTA will oversee the 15km Singaporean section.

International tenders will be launched to appoint an asset company, which will supply and maintain railway systems (track, signalling, telecommunications, and electrification) and rolling stock, and two train operating companies (OpCos). One of the OpCos will operate cross-border services, including an Iskandar Buteri - Singapore shuttle on the southern section of the route, while the second will operate domestic services within Malaysia.

An international tender will be launched next month to appoint a joint development partner, which will provide technical support on joint aspects of the project, including cross-border interfaces and integration. This will be followed by the signing of a final bilateral treaty on the project at the end of the year, which will formally authorise construction. Civil works and tendering for the asset contract are due to begin in late 2017, and tendering for the operating contracts will take place in 2023. The line is expected to open in 2026.

The line will start at a new station in Kuala Lumpur as part of the 197-hectare Bandar Malaysia urban development project, which utilises the site of a former airport. In addition to high-speed services the station will be served by two MRT lines and KTM Kommuter services and an extension of the Klia Ekspres airport rail link is also being considered. From Bandar Malaysia the high-speed line will run south via Seremban, Ayer Keroh, Muar, Batu Pahat, and Iskandar Buteri before terminating at Jurong East in western Singapore.

Passengers will clear customs at the point of departure, and the two governments have agreed to co-locate border facilities at Kuala Lumpur, Iskandar Puteri, and Kuala Lumpur stations.

Trains will operate at 15-minute intervals with a mixture of non-stop express services and stopping trains, which will serve the line's intermediate stations. The journey time for express services will be around 90 minutes, with stopping trains completing the trip in around two hours. According to the MoU services will operated at a maximum speed of more than 300km/h and Spad estimates that the total city-centre-to-city-centre travel time would be 2h 30min, including 15 minutes for immigration, 15 minutes for arrival, and 15 minutes for transit connections at either end of the route.