LONDON St Pancras International and Bordeaux St Jean stations have been formally “twinned” in a ceremony held at St Pancras on March 5 2020 as French National Railways (SNCF) targets the introduction of a service between the two cities by 2022. 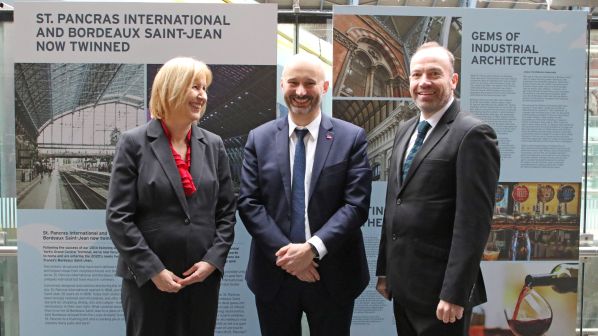 The ceremony was attended by Britain’s rail minister, Mr Chris Heaton-Harris, president of SNCF International Mr Diego Diaz and HS1 CEO, Ms Dyan Crowther. Diaz revealed SNCF’s aspiration during his speech, which is significant because SNCF is the majority owner of the sole operator, Eurostar, to have the trains and operating licenses for such a service.

Development of a new route between London and Bordeaux has been the subject of high-profile lobbying by infrastructure managers along the entire route - HS1, Eurotunnel, SNCF Network and Lisea - with a formal feasibility study initiated in 2019 to address practical issues.

Diaz explained that the twinning will facilitate teams from both stations to exchange ideas and best practice on practical topics ranging from technology to security and protection of heritage as both stations are listed buildings. In addition, experience from St Pancras will help Bordeaux St Jean deal with necessary security and immigration controls.

Heaton-Harris said it is British government policy to encourage the development of further international rail links, referencing Frankfurt, Düsseldorf and Geneva as possible future destinations. He stated that the British government wants to assist prospective operators with practical aspects such as security and immigration controls.

HS1, which operates Britain’s only current high-speed line between St Pancras and the Channel Tunnel, published research undertaken by Steer on March 5, which suggests that high-speed rail can attract 30% of the current air market for routes which have 5 hour journey times such as London - Bordeaux or Frankfurt. There are currently around 15 million short-haul air trips annually to and from London on routes that could be served in 5 hours by rail, illustrating the market potential.