IRJ at the UIC High-Speed Rail World Congress, Tokyo: FRENCH National Railways (SNCF) president Mr Guillaume Pepy has urged high-speed rail operators to fight back against the growing threat to their business from other transport modes by embracing innovation to meet the needs of passengers. 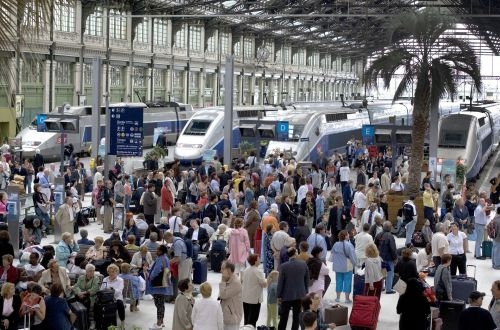 "Aviation is showing increased productivity, and we could be at the start of a new era in car travel," Pepy told delegates at the UIC High-Speed Rail World Congress in Tokyo on July 9, referring to developments such as car sharing and the emergence of autonomous vehicle technology. "We are also seeing the start of competition with long-distance buses, while increasing access charges are becoming a real problem for profitability."

"At SNCF we don't see high-speed rail as a perfect achievement, but rather an ongoing development," Pepy says. "High-speed has been a breakthrough for rail which has enabled us to make a big leap forward, but now the other modes have started to leap forward as well, so we must start to strike back."

Pepy stressed the importance of emphasising rail's green credentials. TGV represents around 10% of the transport market but only around 1% of carbon emissions.

However, he warned the industry needs to focus on fares in a market which is increasingly price-sensitive. "Today people count every Euro, so we have to reinvent our offer," he continued. "We have responded with Ouigo with fares of only €5 for children and €10-15 for adults. We have also launched TGV Pop where passengers can vote for a train service 14 days before they want to travel. This is a response to the 'geek' generation. We are also innovating with new services to cover the last mile and provide door-to-door transport."

Pepy also confirmed SNCF is launching a research programme to develop a new high-speed train, and plans to select a partner in the near future.

"Time and the world do not stand still - we must keep all of our focus on the future," Pepy concluded paraphrasing President John F. Kennedy.