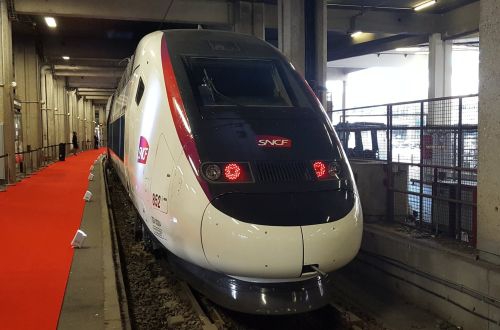 The fleet of 40 dual-voltage (25kV 50Hz ac/1.5kV dc) double-deck trains - dubbed TGV Océane by SNCF - were ordered in March 2012 using a €1.2bn option from a contract awarded to Alstom in 2007. The new trains will be supplemented on Atlantique services by 24 existing Duplex trains, which will be refurbished for their new role. These trains will replace the single-deck TGV Atlantique sets currently used on services from Paris to western and south-west France.

The TGV Océane sets are the first TGVs to feature seats that can be rotated to face the direction of travel. Each train seats 556 passengers (158 in first class and 398 in second class) representing a 22% increase in seating capacity compared with the TGV Atlantique sets. Each train is formed of two power cars, five second-class cars, two first-class cars and a bar car.

TGV Océane features new seating, which has been supplied by Compin and Fainsa. SNCF says the first-class seat seeks to offer “elegance, privacy, tranquillity, while providing a comfortable and warm space where the traveller can work, read and rest.” The seats make use of natural materials including pure wool, leather, and wood, while power sockets and USB charging points are provided at all seats.

SNCF says it will be possible to rotate 90% of seats to face the direction of travel.

Additional luggage space is provided under seats and bicycle storage has also been increased compared with previous generations of TGV.

There are four seats for passengers with reduced mobility and two wheelchair spaces, which are equipped with call buttons.

The trains are equipped with SNCF’s SIVE passenger information system, providing real-time information on the journey and connections. Passenger Wi-Fi will be available throughout the train.

The opening of the Sud Europ Atlantique high-speed line will reduce the Paris - Bordeaux journey time by 1h 10min to 2h 4min, while Paris - Toulouse will be cut to 4h 9min, a 1h 15min reduction.