SPAIN’s Ministry of Development has started public consultation for the construction of two new high-speed lines to connect with the 180.5km Basque Y network currently under construction linking Bilbao, Vitoria, San Sebastián and the French border. 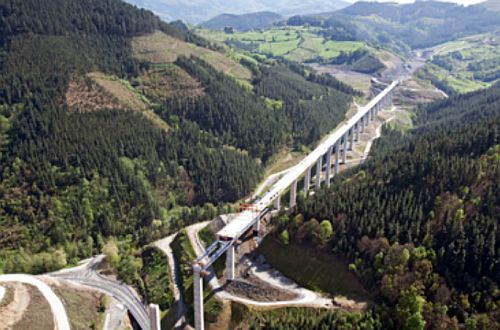 A viaduct takes shape on the Basque Y high-speed network.

One line will run from Vitoria to Burgos where it will connect with the line to Venta de Baños, which is currently under construction. The “West 1” alignment has already been chosen for the Burgos - Pancorbo section, while there are six options for the Pacorbo - Victoria section. The line will be designed for 350km/h operation, and will be electrified at 25kV ac and equipped with ETCS Level 2. A journey time of 30 minutes is envisaged between Burgos and Vitoria, which would cut the Madrid - Vitoria from 3h 36min today to 2h 5min.

The second line will be designed for both passenger and freight traffic and will connect the Basque Y with Pamplona. There are two options:

• Option H would cost €1.7bn and would include a 21km twin-bore tunnel though the Aralar mountains as well as shorter tunnels and viaducts.
• Option V is longer the Option H and would largely follow the existing line from Vitoria to Pamplona making it easier to build and better value for money with an estimated cost of €580m.

The Basque Y is designed for 250km/h operation and comprises a 90.8km new line from Vitoria to Bilbao and an 89.7km branch from Bergara via San Sebastián to Irún on the French border. Around 70% of the network will be in tunnels or on viaducts.