RENFE started commercial service in the Olmedo - Zamora section of the Madrid - Galicia high - speed line on December 17 with a single return service which will cut travel time for the 232km Madrid - Zamora trip by 22 minutes to 1h 33min. 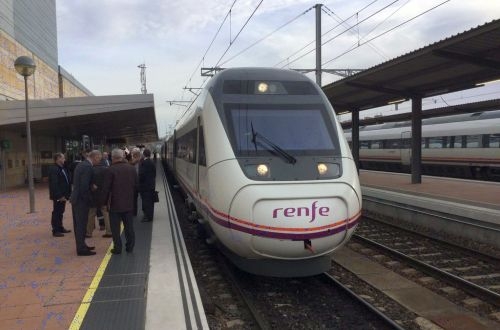 Existing Madrid - Galicia Alvia trains will continue to use the conventional line until the end of the winter holiday season in January, when these services will transfer to the new line.

The line is also used by a new Madrid - Salamanca Alvia service, which uses both the Madrid - Olmedo - Medina standard-gauge line, and the Iberian-gauge Medina - Salamanca route, which has been electrified for this purpose. Three return Alvia services will operate each day via this route, reducing the journey time by an hour compared with the more direct (but much slower) Madrid - Avila - Salamanca conventional line, which is only partially electrified.

The Olmedo - Zamora high-speed line is 98.6km long with double-track on the first and last 21.6km and 9.2km stretches. The entire line is designed for double-track, although the 68.2km central section has only a single track with one passing loop.

Like the Valladolid - Palencia - León line, which opened on September 30, the new line enters commercial service without ETCS as the interoperable system is still being installed. The Spanish Asfa ATP system, widely deployed on the Spanish high-speed network as a backup, will be used in the interim and the maximum speed will therefore be restricted to 200km/h.

Civil works included a total of 15 viaducts, the longest being the 874m bridge over the Trabancos river (874m), although the line does not have any tunnels.

The Olmedo - Zamora line opened to traffic just one day after tickets went on sale, and was not officially inaugurated as the Spanish Law bans such ceremonies in the run-up to a general election, which is due to take place on December 20.