SPANISH airline Air Nostrum is planning to launch open-access high-speed services from Madrid to Barcelona and Montpellier next year in competition with incumbent operator Renfe. 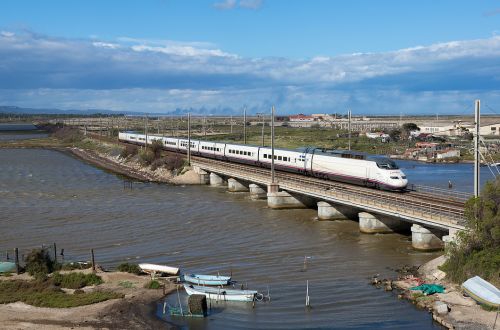 Ilsa plans to use Renfe Series 100 trains, which are already used on services into France.
Photo Credit: David Gubler

The airline’s rail subsidiary Intermodalidad de Levante (Ilsa) submitted a notification of its plans to Spain’s National Commission for Markets and Competition (CNMC) on September 25, becoming the first private company to formally seek permission to launch international services on the Spanish high-speed network.

Ilsa is in the process of obtaining Part A and B safety certification from national safety authority AESF to operate on the Spanish network.

Ilsa initially plans to operate two return services a day between Madrid Atocha and Montpellier Saint-Roch from October 5 2018, with intermediate stops at Zaragoza, Barcelona Sants, Perpignan and Narbonne and a journey time of 5h 47min.

According to the provisional timetable submitted to CNMC, services will depart from Madrid at 07.45 and 15.30, with the southbound trains leaving Montpellier at 07.00 and 15.30. In total, Ilsa plans to operate 1.387 million train-km per year.

Rolling stock will be leased from Renfe and Ilsa plans to use 300km/h series 100 AVE trains, which seat 347 passengers. Light maintenance of the trains will be carried out at Cerro Negro depot in Madrid.

Ilsa says the Figueres - Perpignan high-speed line opens new possibilities for establishing interregional links between Madrid, Aragon, Catalonia and southern France. It argues that Renfe and French National Railways (SNCF) have failed to exploit opportunities in this market, with infrequent services resulting in a low market share for rail.

Ilsa says the annual market for travel on the corridor from Languedoc-Roussillon and Midi Pyrénées to Catalonia, Aragon and Madrid is around 5.3 million journeys, but rail has only captured 241,382 journeys or just 5% of the total.
Furthermore, it argues the current Renfe service from Madrid to Montpellier is “commercially poor” for business travel because it arrives in the French city at night.