TESTING of Saudi Arabia’s 453km Haramain high-speed line reached a milestone on June 15 when a Talgo 350 train reached 310km/h on the section between King Abdullah Economic City (KAEC) and Medina, exceeding the maximum commercial operating speed of 300km/h for the first time. 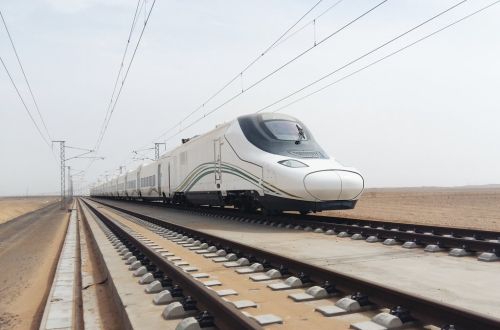 In the coming weeks speeds will be incrementally increased to 330km/h (maximum speed +10%) as the train fleet moves towards final approval for passenger operation.

Talgo says dynamic testing is proceeding satisfactorily in extreme environmental conditions, with outside temperatures of up to 50oC and windblown sand.

The trains are equipped with a so-called “desert pack” encompassing more than 30 additional technologies developed specifically for the project. Features include certified thermal resistance of up to 50oC and an auxiliary power supply which is capable of keeping the air-conditioning system operational for more than two hours in the event of an overhead electrification failure.

The trains are also equipped with blowers positioned close to the wheels to clear sand off the track, positive atmospheric pressure, military-grade air filters, reinforced door seals to prevent dust ingress, and polyurethane sheeting on the driving cab windows to reduce wear from blowing sand.

Talgo is supplying 36 of the 215m-long trains (including a royal train) with an option for 20 more. The manufacturer will maintain the fleet for 12 years.