IRJ at UIC World Congress on High-Speed Rail: Turkey’s transport minister Mr Ahmet Arslan told delegates at the UIC World Congress on High-Speed Rail in Ankara this week that Turkish State Railways (TCDD) YHT high-speed services will be extended from their current terminus in the eastern suburb of Pendik to the centre of the city by the end of 2018. 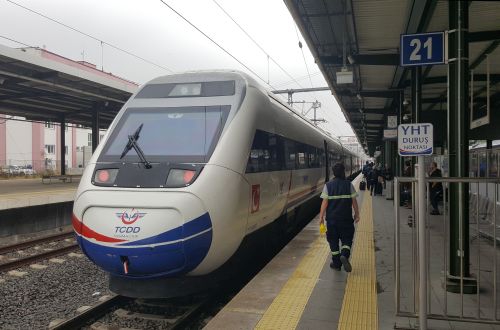 High-speed services currently terminate at Pendik to the east of Istanbul pending the reopening of the rail link into the city.
Photo Credit: David Briginshaw

This will be made possible by the completion of the much-delayed project to rebuild the railway from Gebze via Pendik to Haydarpasa and Ayrilik Çeşmesi to connect with the Marmaray tunnel under the Bosporus, which opened in 2013. The rail link from Sirkeci and Kazliçeşme to Halkali on the European side is also being restored.

The project involved reconstructing the existing double-track line with two tracks for Marmaray commuter trains and one track for main line trains, which will be used by high-speed services during the day and freight at night.

TCDD Transport plans to operate high-speed trains from Ankara and Konya to both the original terminus at Haydarpasa and to Halkali.

Freight trains have been using two train ferries to bridge the gap in the rail network through Istanbul.