Adif AV calls tenders for work worth up to €26m. 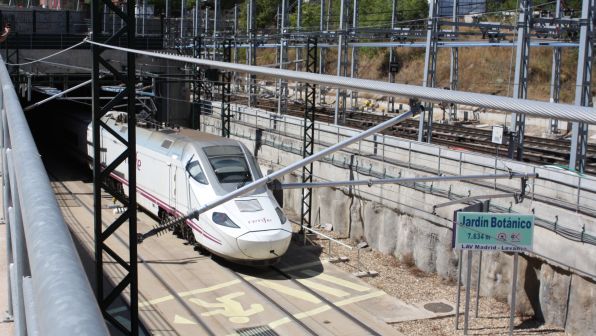 SPANISH infrastructure manager Adif AV has begun tendering for the €26m project to connect Madrid’s Barajas Airport to the high-speed network, which would enable passengers to travel from Madrid Chamartín station to the airport in just over 10 minutes.

The project will make use of the existing 1668mm-gauge route running for 8.8km from Chamartín to Terminal 4 at Barajas which opened to Renfe suburban services in 2011.

The project will involve work on 3.5km of railway and is expected to take 17 months to complete. Signalling and telecommunications work will be tendered under a separate contract.

The new high-speed link to Spain’s busiest international airport will help to convert Chamartín station into a major transport hub, following the opening of a new tunnel for high-speed services to connect it with Atocha station in the south of the city.

A major redevelopment of Chamartín is underway at a cost of €1bn, which will see the station building extended and more platforms provided to accommodate the increase in passenger traffic foreseen with the opening up of the Spanish high-speed passenger market to competition.

This project will also include placing some tracks underground and is currently the subject of an international architectural competition to remodel the station complex dating from 1975.