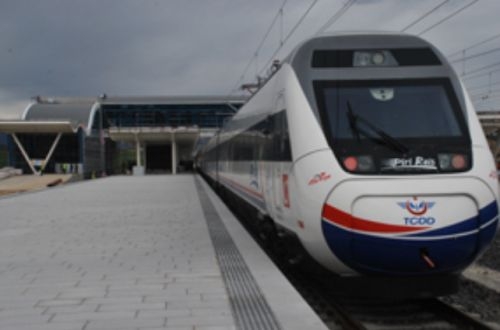 Test running is starting at 40km/h and is being increased by increments of 10km/h until the line speed of 250km/h is reached plus a safety margin up to 275km/h. Karaman says that 247 separate parameters are being measured during testing to ensure track quality, ride comfort and safety.

Karaman says completion of the civil works was delayed by 25 incidents where sections of signalling cables were severed by thieves and difficulties constructing the new line in Eskisehir.

Although an opening date has not been announced, Karaman says TCDD plans to operate 16 trains a day between Istanbul and Ankara with a journey time of 3h 30min. He says services will be extended next year through the Marmaray tunnel to the European side of Istanbul. The Eskisehir – Ankara section opened in March 2009.

TCDD has also announced a tender for the supply of 10 more high-speed trains. The contract includes spare parts and maintenance for three years.

Süleyman Karaman (right) on board a test train.