HIGH-SPEED testing is underway on the Treviglio - Brescia high-speed line in preparation for the start of commercial operations in December. 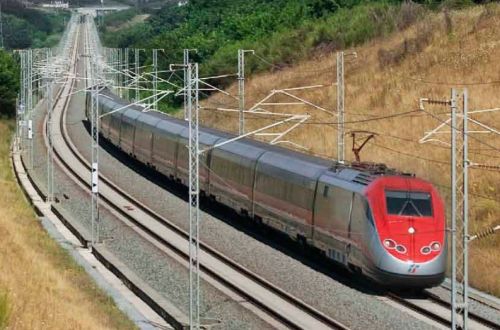 To gain certification for 300km/h operation from the National Authority for Railway Safety (ANSF), an ETR 1000 Frecciarossa set is being tested at speeds of up to 330km/h. A Trenitalia ETR 500 high-speed train has been used for ETCS Level 2 testing.

Infrastructure manager Italian Railway Network (RFI) is testing railway equipment and overhead catenary with the support of Bergamo-based 2A Tech, which has been appointed to oversee all phases of the test programme, including trial runs and certification of the electrification system.

Forming the central section of the 140km Milan - Verona high-speed line, the Treviglio - Brescia high-speed line is 39.6km long and electrified at 25kV ac 50Hz, with 3kV dc electrification on 18.6km of links to the conventional network.

The line has a minimum curve radius of 5450m with a maximum gradient of 15‰.

The project involved the construction of 4.1km of bridges and 800m of tunnel.