THE first test run along the full length of the 643km Xi’an - Chengdu high-speed line took place on November 22, marking a milestone in the construction of the first railway across the Qinling mountains in China’s northwestern Shanxi province. 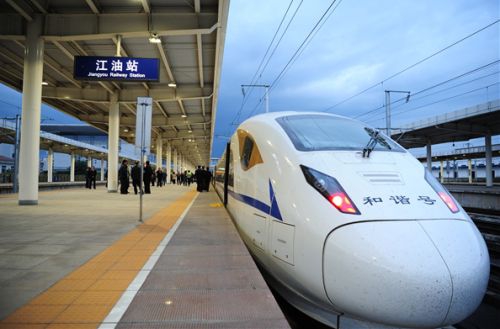 Construction began on the southern section of the route in Sichuan province in November 2010, and on the 343km Shanxi section in October 2012. The 124km Jiangyou - Chengdu section opened in December 2014.

The line has a design speed of 250km/h and 127km of bridges and tunnels, six of them more than 10km long, were constructed to thread the railway through the Qinling mountains.

The line passes through two national nature reserves, and protective measures were put in place during construction to safeguard endangered species including pandas and crested ibis.

The line is due to open next month, slashing the Xi’an - Chengdu journey time from 16 hours to three hours. According to reports in the Chinese press, China Railway Corporation (CRC) will operate five Xi’an - Chengdu and two Xi’an - Chongqing services over the route each day.