TEXAS Central, which is planning to build a privately-funded 386km 320km/h railway linking Dallas with Houston, has selected the site for its station in Dallas and says it has reached an agreement with developer Jack Matthews, which owns the site. 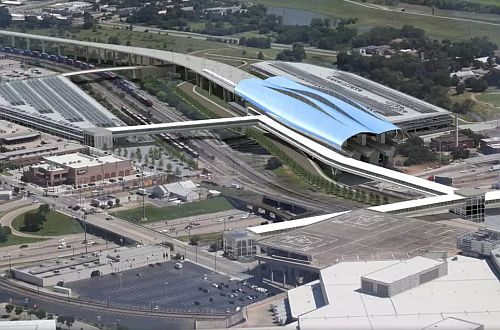 The terminal will be built on a largely-vacant 24.3-hectare plot alongside an existing railway south of Dallas’ Kay Bailey Hutchison Convention Centre in the revitalised Cedars neighbourhood, near the highway interchange between Interstate 30 and Interstate 35.

The multi-level station between South Riverfront Boulevard and Austin Street would have restaurants, bars, seating areas, fast food outlets, newsstands and rental car counters. It would be connected by enclosed elevated walkways to new parking facilities, bus services, and nearby Dart light rail stations at the convention centre and Union Station. The Trinity Railway Express commuter line could also be extended south from Union Station to the new high-speed station to provide a direct link to Fort Worth.

“This station will be a magnet for economic activity in an area ripe for development,” says Texas Central CEO Mr Carlos Aguilar. “And it will connect seamlessly with local roads and public transit.”

Texas central envisages a 90-minute journey time from Dallas to the Greater Houston region, with a midway stop in the Brazos Valley serving Bryan-College Station and Texas A&M University.

In December, the US Federal Railroad Administration (FRA) identified the preferred route for the new line, which will mostly follow electricity transmission lines in a utility corridor between North Texas and Houston.