The first high-speed line in Indonesia is now expected to open in 2023. 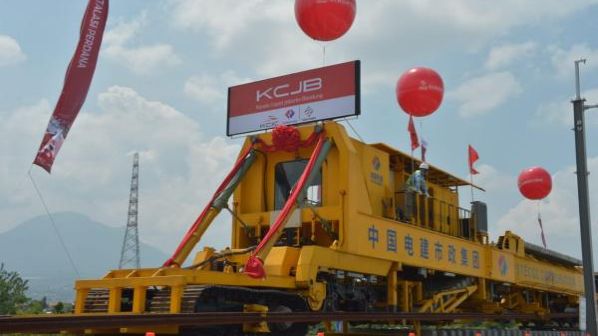 The first section of track for the Jakarta - Bandung high-speed line was laid on April 20.

INDONESIA’s minister of transport, Mr Budi Karya Sumadi, witnessed the laying of the first section of track for the Jakarta - Bandung high-speed railway (KCJB) at Tegaluar depot in West Java on April 20. Also present at the ceremony was Mr Zulfikri, director general of railways.

The $US 8bn 142.3km railway, which will have a maximum speed of 350km/h, was originally planned to open in 2019, but Indonesia’s president Mr Joko Widodo, announced in January that the opening of the new line has been delayed until June 2023.

The minister of transport confirmed at the ceremony that dynamic testing will start by the end of 2022. “It is hoped that the president of Indonesia Joko Widodo and the president of China will jointly conduct a trial,” Sumadi said.

The director of Kereta Cepat Indonesia China (KCIC), Mr Dwiyana Slamet Riyadi, said at the ceremony that progress on the project has reached 82%, with a target of completion and operation in 2023. He said that driver training is currently underway.

KCIC was formed in October 2015 to implement the project and is a joint venture between a consortium of Indonesian State-Owned Enterprises (BUMN) through PT Pilar Sinergi BUMN, and a consortium of Chinese railway companies through Beijing Yawan HSR.

The new line will have four intermediate stations at Halim, Karawang, Padalarang and Tegalluar. More than 80km of the new line will be elevated and there will be 13 tunnels. The high-speed railway will be operated by a fleet of CR400AF trains.