A CEREMONY was held at Toyama station on May 24 to mark the completion of tracklaying on the 228km Nagano – Kanazawa section of the Hokuriku Shinkansen, with around 60 dignitaries tightening bolts on the final section of rail. 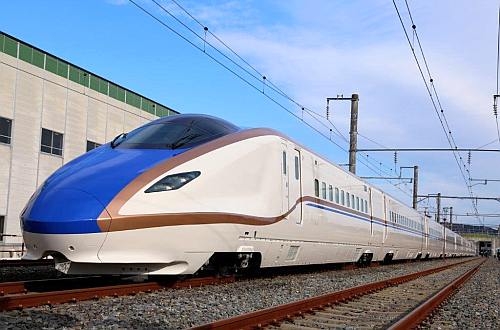 The Nagano - Kanazawa section has five tunnels the longest being the 2.2km Iiyama tunnel, and a number of major bridges spanning rivers. There are six intermediate stations including Joetsu, Itoigawa and Toyama. Tracklaying began in December 2010 in the Iiyama Tunnel and test operation began on the section between Nagano and Kurobe in Toyama prefecture in December 2013. Testing is due to be extended to the Kurobe – Kanazawa section in August and commercial services will begin operating on the Yen 1.78 trillion ($US 17.5bn) line next March.

The line will be jointly operated by JR East and JR West, and the two railways have jointly procured a fleet of 27 trains for Tokyo – Kanazawa services, which will be known as series E7 by JR East and series W7 by JR West.

The journey time between Tokyo and Kanazawa will be cut to 2h 30min from 3h 47min via the present route which involves taking a Joetsu Shinkansen train from Tokyo to Echigo-Yuzawa and connecting with a 1067mm-gauge train on the Hokuetsu Kyuko line which has a maximum speed of 160km/h.

A full description of the Hokuriku Shinkansen and the series 7 trains can be viewed here.