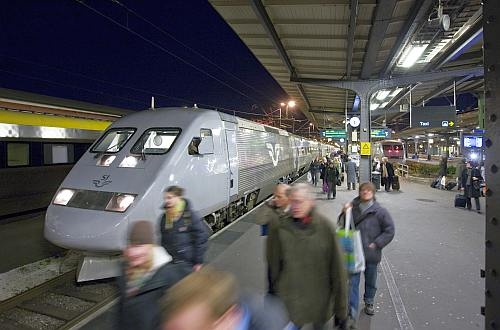 The Y-shaped network would comprise a line running east-west from Järna near Stockholm to Linkoping, Jönköping and Boras, rejoining the conventional network at Almedal on the outskirts of Gothenburg, together with a branch running south from Jönköping to Åkarp, halfway between Lund and Malmö.

Construction of the Järna – Almedal line would be split into six sections, which would open in three phases between 2023 and 2025. Infrastructure would be designed for a commercial operating speed of 250-320km/h.

The total cost of the network is estimated to be around SKr 125bn ($US 19.4bn) at 2008 prices, of which SKr 59bn would come from the state, SKr 43bn from track access charges, SKr 19bn from local and regional governments, and SKr 4bn from the European Union. The remaining SKr 19bn would cover the cost of private finance, and the report suggests costs could be reduced if the project is entirely publically-funded.

Funds could be raised for the project through a special infrastructure charge on freight operators who would benefit from additional capacity on existing routes.

In addition to the infrastructure cost, an estimated SKr 29bn will be required for rolling stock, although the train fleet will be financed and procured by the operators.

The report includes an updated economic analysis of the project, which has been carried out for Trafikverket by PriceWaterhouseCoopers (PwC). Cost-benefit analysis has shown the network would have a positive net present value ratio of 0.15 and under a completely open-access scenario, PwC estimates train operator revenues on the route would be around SKr 12.9bn in 2030.

The report puts forward two proposals for managing the development and implementation of the project. Under the first model, the state would form a project company, which in turn would form an infrastructure company to carry out detailed design, construction and operation of the infrastructure. Under the second option, the state would fund the project company, which would manage the procurement process itself.

The full report (in Swedish) can be downloaded on the Trafikverket website (external link).