FOLLOWING its recent decision to acquire 17 of the 19 redundant AnsaldoBreda V250 Fyra high-speed trains, Trenitalia has revealed its plans to modify the trains for operation in Italy. 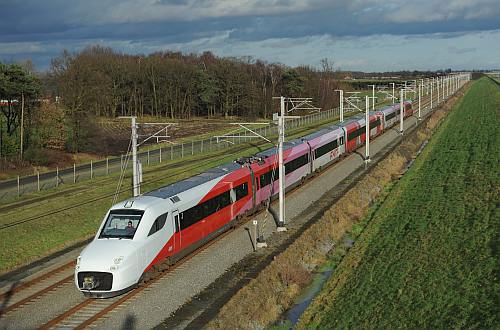 According to sources close to the project, Trenitalia wants to alter the nose design and the seating layout, modify the pantographs and onboard ETCS equipment and repaint the fleet in a new livery. Trenitalia has also asked for a full overhaul to be carried out.

The first train should be ready at the end of this year, and the remaining 16 trains will be modified in first half of 2018. The trains will then need to obtain an authorisation to place in service. Trenitalia plans to introduce the trains on services from Puglia to Naples and Rome at end of 2018.

The V250 trains were originally supplied by AnsaldoBreda to Netherlands Railways (NS) and Belgian National Railways (SNCB), for operation on Amsterdam - Brussels Fyra high-speed service, but were rendered surplus by the collapse of Fyra in 2013 and returned to AnsaldoBreda in 2014.