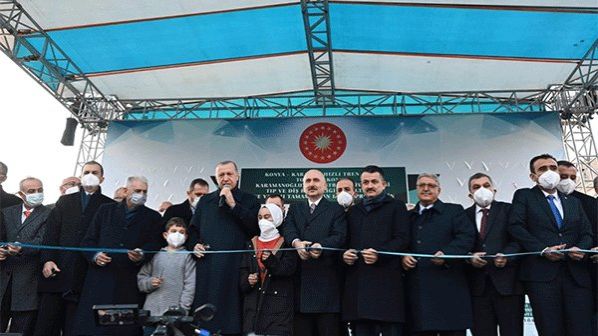 TURKISH president, Mr Recep Erdoğan, opened the 102km Konya - Karaman high-speed line at a ceremony in Konya on January 8, where he was accompanied by minister of transport and infrastructure, Mr Adil Karaismailoğlu, and other ministers, deputies and officials.

The freight and passenger line cost Lira 1.39bn ($US 102.4m) and is expected to save the Turkish economy Lira 63m a year through saved time and energy and reduced emissions.

“Today, we are starting a new era by opening the Konya - Karaman high-speed train line,” Erdoğan said. “This step will be followed by Karaman - Ulukışla, then Mersin, Adana, Osmaniye and Gaziantep. When we add the Ankara - Sivas line, on which trial services have started, all four parts of our country will be accessible by fast or high-speed train from Konya.”

Using the speech to highlight the role Turkey is looking to play in connecting Asia and Europe by rail, Erdoğan said the length of the Turkish network has increased from 10,959km to 13,222km in recent years, including 1213km of high-speed lines. He also pointed to the construction of the Marmaray line under the Strait of Istanbul as another notable achievement.

“The problems experienced in sea and air freight transport during the pandemic highlighted the railways as a serious alternative,” he said. “With these investments, we have completed the most critical stages in making our country ready for passenger and rail freight. We are determined to make Turkey a central country in rail, like many other fields, by rapidly completing our current investments. The Konya - Karaman high-speed line will be an important part of the southern axis of this great project.”

Construction of the 135km Karaman - Ulukışla section is currently 89% complete. This includes two tunnels, 12 bridges, 44 under and overpasses and 141 culverts. The signalling system is currently in the design phase, while a tender for the electrification of the line is being prepared. The section will reduce Karaman - Ulukışla journey times from 3h 40min to 1h 35min.