The 80m-long, 21m-high bridge was moved into place during a 10-hour operation. 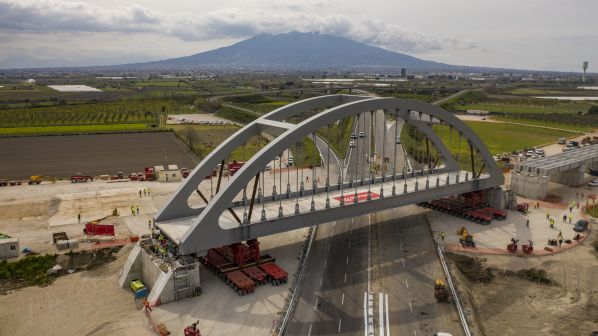 WEBUILD has reached a milestone in the construction of the Naples - Bari high-speed line, installing the first of three 2500 tonne steel arches over a road near Acerra, on the outskirts of Naples.

The 80m-long, 21m-high bridge was moved into place during a 10-hour operation on March 29 using 18 special trailers that distributed its weight along 104 wheeled axes. The bridge was then lifted about 6m above ground using strand jacks.

The project, which has an estimated total cost of €6.2bn, is due for completion in 2027. The line will form part of the Scandinavia - Mediterranean Trans-European Network (TEN-T), and will halve travel times between Naples and Bari to two hours.

The European Investment Bank (EIB) approved a €2bn loan to support the construction of the line in September 2020, the largest loan the EIB has ever granted for a single project, as part of €2.5bn of new funding for European transport projects.

In March 2019, Italy’s infrastructure manager Italian Railway Network (RFI) awarded a 60:40 consortium of Webuild, then Salini Impregilo, and Astaldi a €608.1m contract to build the 18.7km Apice - Hirpinia section of the line, after the consortium was awarded a €397m contract to construct the Naples - Cancello section of the line in 2017. Webuild has since purchased a 65% stake in Astaldi.

The 15.5km Naples - Cancello section will include a new station in Napoli-Afragola to provide an interchange with regional services. The section will pass through the towns of Casoria, Casalnuovo, Afragola, Caivano and Acerra.

The 18km Apice - Hirpinia line crosses the Apennine Mountains, and will include a station at Hirpinia and three natural tunnels and four viaducts.