AFTER a month of intensive testing, Denmark’s Ministry of Transport, Building and Housing granted final approval on August 24 for the extension of Aarhus light rail services to Lisbjergskolen and Odder. 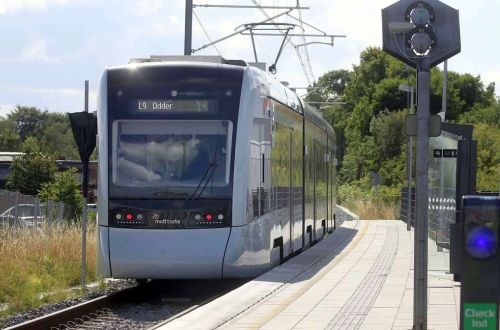 Passenger operation began the following day on the 3.5km northern section of Line 2 from Skejby University Hospital to Lisbjergskolen and the 27km southern section from Aarhus Central station to Odder, which operates as a tram-train line.

A half-hourly service operates between Odder and Lisbjergskolen, with increased frequencies at peak times, and these are integrated with the 10-minute interval service on the core section between Aarhus Central and Skejby, which opened in December 2017. The line to Odder is largely single track, while the Skejby - Lisbjergskolen line is double-track.

Stadler Tango LRVs are used on services to Odder, while Stadler Variobahn trams operate on the central section.

The next stage of the project involves extending tram-train services to Grenaa on an existing heavy rail alignment which will be cleared for 100km/h operation, and a link between Lisbjerg on Line 2 and Lystrup on the Grenaa line. This stage is due to open by the end of the year.

An environmental hearing is underway for the next phase of the project, which has been divided into three sections. Section 1 is an extension to the newly-developed eastern harbour in Aarhus. Section 2 involves building a branch running east from the main station to the suburb of Braband via the city centre. Part of the route will use the alignment of an abandoned heavy rail line.

Section 3 will extend Line 2 north from Lisbjergskolen to Hinnerup, where a park-and-ride station will be built near the E45 highway. This section will be linked to the main line north of Aarhus, but no decision has yet been made on where tram-trains would terminate.