THE first of 26 LRVs being built by Stadler for the light rail network in Aarhus arrived in the Danish city for testing on August 11. 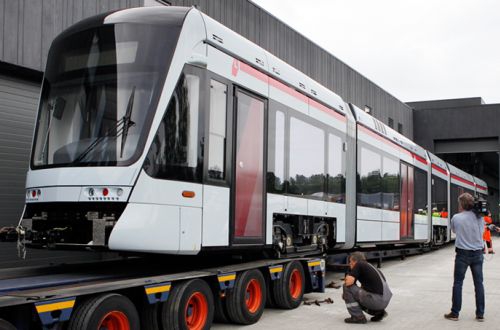 The LRVs are being built at Stadler’s factories in Germany and Switzerland, and the first passenger trip is scheduled for May 2017.

The first LRV constructed was a Variobahn, which has undergone testing at Stadler’s Velten plant near Berlin prior to delivery. The Variobahn is 32m-long, can run at up to 80km/h, and has three double-doors and one single door on each side of the five-section vehicle.

Another 13 Variobahns will be built in Berlin, while 12 Tango tram-trains are being constructed at Stadler’s factory in Altenrhein, Switzerland. These 39m-long vehicles will be able to run at 100km/h because they have a different suspension system from the Variobahn.

Aarhus Letbanen is building a 17-station 12km light rail line through the city centre and a 98km tram-train service to Grenaa and Odder, which is scheduled for completion in mid-2017.

For more on the project see the October 2015 issue of IRJ p44, or click here.