LETBANEN, the public company responsible for developing the tram-train network in the Danish city of Aarhus, revealed the final interior and exterior designs on June 1 for its fleet of 26 LRVs, which is being supplied by Stadler Pankow. 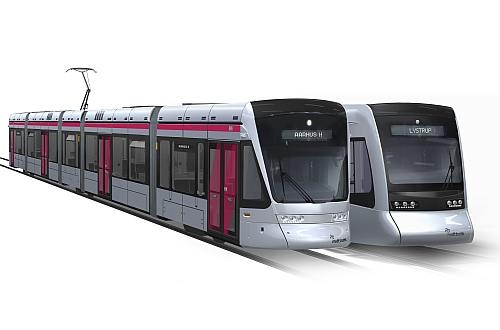 The design is intended to be "elegant and timeless, comfortable yet functional, accessible but built to last," providing an easily recognisable identity with clear references to Scandinavian design culture, which combines minimalism with high functionality.

The grey exterior livery with a hint of blue reflects the line's proximity to the sea and this is broken up with elements of bright red, Letbanen's signature colour. Interior seat coverings are being provided by Danish textile company Kvadrat, which has supplied upholstery for the Museum of Modern Art in New York and the Reichstag in Berlin. Kvadrat has developed the design for Aarhus in cooperation with Danish design house AVPD.

The light rail project involves constructing a 12km line with 18 stations through the city and electrifying the heavy rail lines running northeast to Grenaa (19 stations) and south to Odder (16 stations), which have a combined length of around 110km.

Stadler Pankow will supply 100km/h Tango tram-trains for services to Grenaa and Odder and 80km/h Variobahn LRVs for use on the urban section of the network. The contract is Stadler Pankow's first order from Denmark.

The manufacturer has developed a new front end design for the Tango, which is similar to the Variobahn, to create a uniform look for the fleet.
The line is due to open in 2017, when Aarhus will be European Capital of Culture.

Stadler Pankow is part of the ASAL consortium, which was awarded a contract last year to supply rolling stock and infrastructure for the project.