THE first Alstom Citadis X05 low-floor LRV for the second light rail line in Nice was unveiled to the media by the city’s mayor Mr Christian Estrosi at Charles Ginésy Maintenance Centre on February 9. 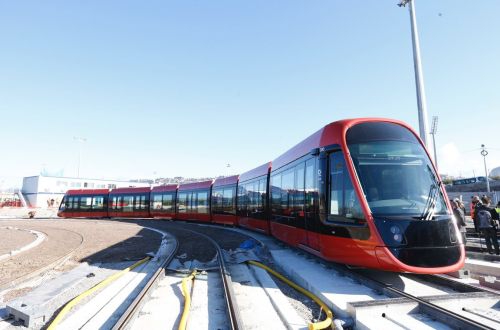 Nice Côte dAzur Metropolitan Council awarded Alstom a €91m contract in October 2015 to supply 19 LRVs and ground-based Static Charging Zones (SRS) for the 11.3km line, which will connect Airport Terminal 2 and Nikaia Administrative Centre in the west with Port de Nice in the east. Line T2 is due to open later this year.

In December 2017 the council exercised a €27m option with Alstom for six additional vehicles and 22 ground-based SRS zones for tram Line T3.

The final design of the vehicle, which was styled by Nice-based designer Ora Ïto, was selected following a poll of nearly 15,000 residents, with 44% choosing the so-called “modèle ocre” look.

Each 44m-long LRV will accommodate up to 300 passengers, and has a maximum speed of 70km/h. The vehicles are equipped with Alstom’s Citadis EcoPack system for catenary-free operation, with a 20-second charging cycle at stations.