THE first of 22 Citadis low-floor LRVs being supplied by Alstom as part of the £570m second phase expansion of Nottingham's light rail network was unveiled at Nottingham Express Transit's Wilkinson Street depot on September 13. 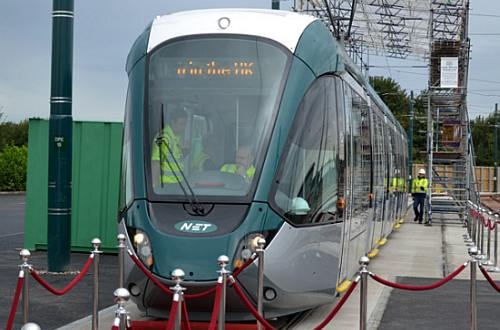 The 32.6m-long vehicle, which was built at Alstom's Santa Perpetua plant near Barcelona, will accommodate 57 seated and 143 standing passengers. Five of the LRVs will enter service in the middle of next year, allowing frequencies to be increased on Line 1, while the remainder of the fleet will be delivered in time for the opening of the second phase lines next December.

Alstom is a member of the Tramlink Nottingham Consortium, which was awarded a 23-year design, build, finance, operate, and maintain concession in December 2011. This encompasses the construction of Line 2 to Clifton and Line 3 to Chilwell, and operation of the entire network, including Line 1. Other members of the consortium include civil works contractor Taylor Woodrow and financial partners Meridiam Infrastructure and OFI InfraVia Fund. Keolis and local bus operator Wellglade will be responsible for operating the enlarged network.

The total value of the LRV contract is £294m, which includes a £101m maintenance package covering both the new vehicles and the existing fleet of 15 Bombardier LRVs supplied for the first phase of the network.

A full description of the NET Phase 2 project can be viewed here.