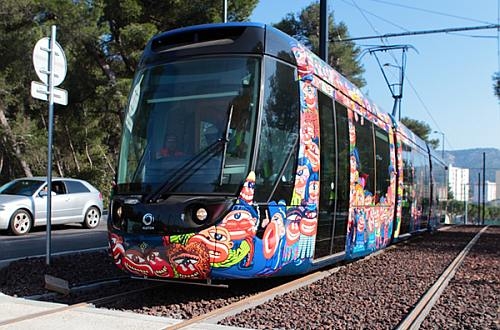 Like the town's bus network, no fares are charged for travel on the tram line, making it the first free-to-use light rail system in France and one of the first in Europe.

The 2.7km line has seven stations and links the main line station in Aubagne with Charrel. Construction began in early 2013 and the project had a budget of €166m including rolling stock.

The Urban Community of Pays d'Aubagne et de l'Etoile decided in April that it would not proceed with construction of the second or third phase of the network, although the community's president Mrs Sylvia Barthélémy announced at the opening ceremony that the municipal government will study the reopening of the 14km Valdonne railway north of Aubagne as a light rail line.

The proposed line would serve an area with a population of 60,000, linking Aubagne with Roquevaire, Auriol, La Destrouse, and La Bouilladisse. At present there are around 18,000 car journeys a day on the road between Aubagne and La Bouilladisse, and 110,000 vehicles per day use the motorway linking the area with Marseille.