THE French city of Avignon inaugurated the first phase of its new light rail service on October 19, a 5.2km stretch with 10 stations. 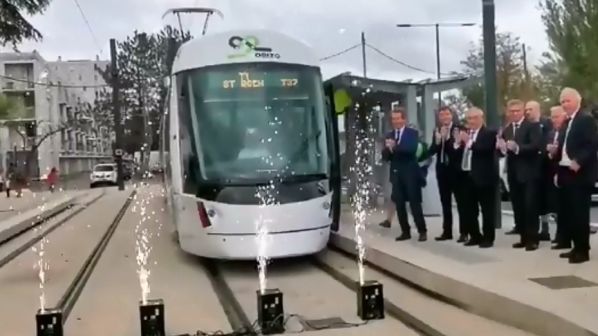 The line runs from Saint Roch, on the south side of the city centre, via Avignon Centre mainline station, where it turns south to follow Avenue Saint Ruf and Avenue de Tarascon and then turns east along Rocade Charles de Gaulle and passes through La Barbière district to reach the terminal at Saint Chamand.

Journeys between the termini on Line T1 take 15 minutes and are served by 14 three-section LRVs supplied by Alstom. The 24m-long, 2.4m-wide vehicles are a shortened version of the Citadis X05 and use 750V dc traction. They have capacity for up to 140 passengers and have a maximum speed of 70km/h.

Services run at 5-6 minute frequencies between 06.00 and 00.00 and are operated by Orizo, the public transport operator in the greater Avignon area, while Grand Avignon is the line’s owner. Existing bus services have been optimised to coordinate with the new service.

Plans for the project were approved and developed in 2011-13. However, inauguration of the project was in doubt in 2014 when the newly-elected mayor vowed to cancel the scheme. The result was a modification to the plan, scaling back the project from three lines to one and the cost from €330m to €135m, with construction getting underway in October 2016.

Expansion of the network is still planned through the construction of Line T2. Construction is currently scheduled to start in 2021 and conclude in 2023. There are also plans to extend Line T1 to the north while additional sections could be added to the LRVs to meet future demand.