Stadler was selected as preferred bidder in February, with the contract awarded nine months later. 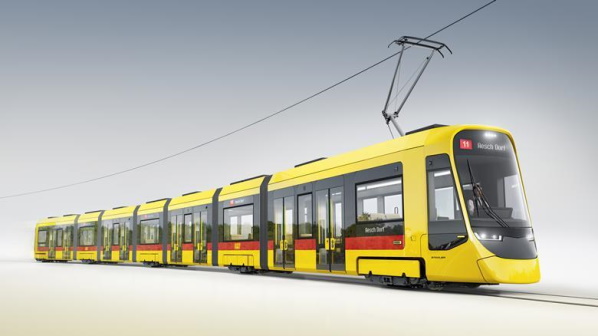 BASELLAND Transport (BLT), Switzerland, has awarded Stadler a SFr 125m ($US 140m) contract for 25 LRVs which will enter service from December 2023 with the final vehicles in service during 2025.

The Swiss manufacturer was selected as the preferred bidder for the contract in February, with the contract confirmed on November 12 after the BLT board of directors authorised the release of credit for the procurement of the LRVs. Funding commitments have been obtained from the federal government and the cantons of Basle-Landschaft, Basle-Stadt and Solothurn.

Stadler will build the LRVs at its Bussnang facility in Switzerland and they will replace the existing Schinder LRVs dating from the mid-1980s.

The 80km/h seven-section steel-bodied vehicles will be 45.5m long and 2.3m wide. They will feature four powered bogies and one unpowered bogie. The vehicles will have a total capacity of 268 passengers including 96 seated.

BLT will be the first Swiss operator to use Stadler’s new Tina (total integrated low-floor drive) LRV. The vehicles will be 85% low-floor with step-free access.

The LRVs will be equipped with a collision warning system, CCTV, air-conditioning, large panoramic windows, and an integrated passenger information system, and will be pre-equipped to allow the subsequent installation of sliding steps on all double doors.