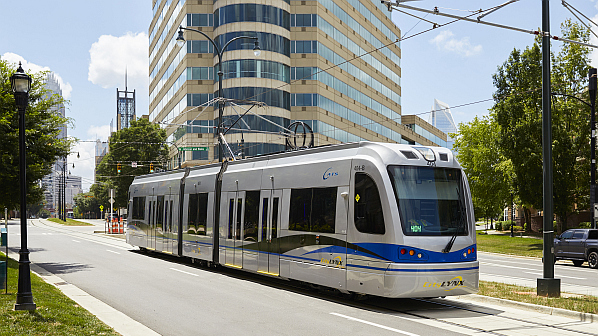 BATTERY-hybrid LRVs built by Siemens Mobility have entered service in Charlotte, North Carolina, running on a 4.02km extension of the CityLynx Gold Line that opened on August 30.

The extension runs west from Charlotte Transportation Center to French Street and north along Hawthorne Lane from the Presbyterian Hospital to Sunnyside Avenue. The Gold Line will eventually be extended to 16km and is part of Charlotte’s 2030 transit plan, which is being implemented in phases.

Built in Siemens’ Sacramento factory in California, the S700 LRVs feature hybrid wireless technology and can operate off-wire via an Onboard Energy Storage System (OESS) which includes an expandable and modular design that can be updated as battery technology evolves. This allows the vehicles to operate away from overhead catenary which means Charlotte’s historic district can remain preserved.

The new LRVs operate on the second phase of the CityLynx Gold Line, replacing trams dating from 2003. The new phase adds 4.02km and 11 stops to the line, extending its length to 6.4km.

“Sustainable transportation is one of the most important features for growing cities,” says Siemens Mobility CEO, Mr Michael Peter. “Our battery hybrid vehicles provide Cats and its passengers with an energy efficient mobility solution that not only improves the overall availability of transportation, but also offers a comfortable ride and enhanced passenger experience.”

The LRVs can run at up to 40km/h and can carry 195 passengers. They also feature large windows, an improved interior surveillance system and an unobstructed floor design that allows for more space for bicycle storage and wheelchairs.

Operational performance enhancements on the S700s include traffic light pre-emption, a pedestrian-friendly front mask and an automatic passenger counter.