THE second phase of the light rail network in the Norwegian city of Bergen was inaugurated on June 21, when Hordaland county mayor Mr Tom-Christer Nilsen and Bergen mayor Mrs Trude Drevlan officially opened the 3.6km extension from Nesttun to Lagunen station in the district of Rådal. 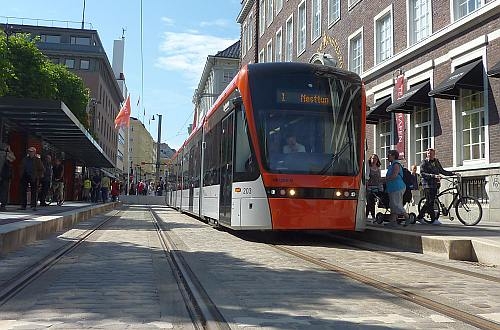 Public services began the following day on the five-station extension, which has been completed two months ahead of schedule and NKr 300m ($US 49.5m) under budget.

Construction began in January 2011 on the extension, and track, catenary, and power supplies were designed by Atkins and Multiconsult, Norway.

The initial 9.8km section between Byparken in the city centre and Nesttun opened in 2010 and the line carries more than 31,000 passengers per day.

Construction will begin in August on the third phase, which will extend the line 7.1km beyond Lagunen to Kokstad and Flesland Airport. The project, which includes the construction of 2.9km of tunnels, is due to be completed in mid-2016.

The system is operated by Fjord1 Partner, a joint venture between Fjord1, Norway, (51%) and Keolis, France, (49%) which has a six-year contract with two options for one-year extensions.