THE new tram line connecting Berlin Main Station and Nordbahnhof S-Bahn station opened partially on December 14, although the eastern section to Nordbahnhof will not open before mid-2015. 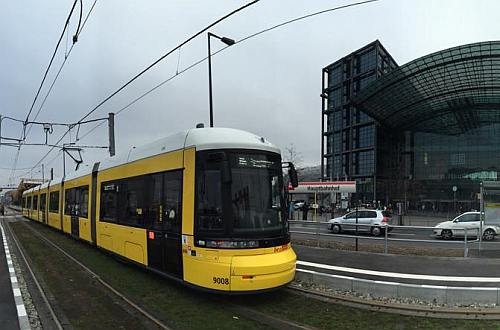 The section of line which is now operational runs from the junction of Friedrichstrasse and Invalidenstrasse along Invalidenstrasse to a tram stop outside the northern entrance to Berlin Main Station. The line currently has a reversing loop west of the station although a western extension to either Alt-Moabit or Turmstrasse U-Bahn stations is currently being discussed.

The 2.9km double-track line cost €30m and has taken 12 years to construct as initial work started in 2002. The Main Station itself opened in 2006 but until now has had no connection to the extensive tram network in eastern Berlin.

Ridership is expected to reach 20,000 passengers a day once all three routes are operational.